In 2005, White Wolf updated the rules from the previous game giving the new series the name World of Warcraft: The Roleplaying Game. This was done in order to tie in with the success of the World of Warcraft MMORPG and to use the Open Gaming License.[2] A conversion document was released seperately explaining how to convert material from the previous game into the new system. The document also notes incompatible material that was replaced or eliminated in the new system. 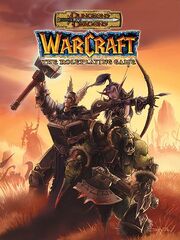 The book cover for Warcraft: The Roleplaying Game. 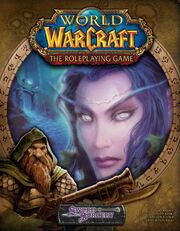 The book cover for World of Warcraft: The Roleplaying Game.

The following sortable table has a default order based on the order the books were published.

For the chronological order of where the books fit in the game world timeline, see Timeline (RPG Books Chronology).

Note that SKU 17209 has not yet been used by White Wolf Publishing.

Chris Metzen was in charge of the lore and used the books to expand upon things in his view of the World of Warcraft. Many things do not show up in the MMORPG due to limitations of the game's scale and other gameplay mechanics. These limitations make the game incapable of showing everything. Metzen's personal view is that the history of Azeroth is not found in just one source, but includes the RPGs, novels, comics, manuals, and games.

For example, in this interview, Metzen discusses a little bit about on how he uses the RPG to explain things within the World of Warcraft MMORPG.[3]

BI: How do the Gnomes fit back into Warcraft lore? They were notably absent from Warcraft III. Where have they been?

Metzen: I think we deal with it a little bit in upcoming D&D supplements. During Warcraft II, the Gnomes were, in effect, building weapons and lending designs to the Alliance — but they were staying out of any direct fighting. In Warcraft III and Frozen Throne, and even in World of Warcraft, it becomes clear that the Gnomes have had internal problems of their own for several years. As of World of Warcraft, they still offer support to the Alliance in terms of building tanks, designing weapons, sending flying machines, and so on. But they had a problem at home that has recently been discovered - an ancient menace from the depths of the underground, called Troggs. The Troggs invaded the Gnome's city of Gnomeregan and wiped it out. The Gnomes decided not to let the rest of the Alliance know about this because they figured that they could deal with it on their own. But Gnomeregan fell, probably thanks as much to the Gnomes' own actions as to those of their enemies - they likely blew themselves up with whatever failsafe devices they used to defeat the threat. After the destruction of their homeland, the Gnomes fled to the safety offered by their nearby allies the Dwarves.

Furthermore, Metzen discusses the RPG as an expansion to Warcraft lore within several foreword letters within the RPG as well.

From his introduction letter to Manual of Monsters:[4]

As you might imagine, many of us here at Blizzard have been playing D&D and other paper-and-pencil games since we were old enough to get shot down by girls. Armed only with funny dice, a fistful of Number 2 pencils, and our raw imaginations, we set out to be heroes, explorers, kings. Whether we were facing down the mighty dragons of Krynn, getting stranded somewhere in the endless fields of Faerûn, trying to keep our wits about us in Castle Ravenloft, or boldly challenging the unknown in worlds of our own making, our collective love for fantasy roleplaying has been with us from the very start. We've been developing the Warcraft series for the past ten years or so — frankly, it feels like it's been in dog years — and it's been a truly amazing experience to build a rich fantasy setting from the ground up. I guess the countless hours we spent thumbing through our old, ragged DMGs and Player’s Handbooks paid off after all! Though developing the world of Azeroth has been tremendously rewarding on the creative front, seeing it made into an official Dungeons & Dragons product — Dungeons & Dragons Warcraft the Roleplaying Game, in fact — has been downright monumental for all of us. The book you hold in your hands builds upon the D&D Warcraft RPG. It is full of the strange yet wondrous creatures that populate the world of Warcraft. In many ways, this Manual of Monsters is like a time capsule for ten years’ worth of ongoing world development. Looking back over much of this artwork, an old phrase comes to mind — “the more things change, the more they stay the same.” Damn straight they do. Fat, two-headed ogres; wiry trolls with bright mohawks; hooded, spell-casting death knights: these guys immediately remind me of developing Warcraft II eight years ago. That was an amazing time for us creatively. Although it took a few years, introducing the new generation of creatures with Warcraft III proved to be just as exciting. Lion-faced, furry wyverns; centaur-like dragonspawn; ill-tempered quilboar and serpentine naga: they all rolled on to the scene and quickly dominated Warcraft's new visual landscape. Still, with every new batch of creatures we introduced, we held firm to the classic fantasy archetypes such as gnolls, kobolds, harpies, and hydras (among others) that we all grew up with. We've always felt that there is a precious balance between the classic motifs that define contemporary fantasy and the higher concept ideas that keep the settings we love fresh and distinct from one another. It's the merging of the “new” and “old schools” in fantasy that makes it such an engaging medium for us as developers, designers, and — especially — players. We sincerely hope you enjoy Manual of Monsters and use its creatures to fuel as many adventures as you can imagine! All right! Enough about the monsters already! Go and get 'em! Grab your dice, get out there, and give 'em hell! Good hunting, y'all!
- Chris Metzen (co-author), Creative Director, Blizzard Entertainment, 7/07/03

In rebuttal to a poster that claimed that the RPG was not official, Eyonix had this to say: [5]

Any piece of literature authorized and licensed by Blizzard Entertainment is in-fact, official. The book series written by Richard A. Knaak in particular is an excellent example of real 'Azerothian' history and lore available outside of our game software. We work closely with authors that help us expand our game universe, and the information should be considered official.

I'm very sorry but your assumptions are not correct. - Eyonix

On the World of Warcraft official website, the Warcraft RPG is said to be an important part into getting to know more about Warcraft lore. In the "History of Warcraft" section:

"Want to know more about the lore of World of Warcraft? The game doesn't require any additional reading to play. However, you might enjoy gaining a more detailed knowledge of Warcraft lore. Here are some resources that are available: ...RPGs... Warcraft Role-Playing Games provide a wealth of information about Warcraft lore."

In the second Ask CDev Q&A, Blizzard stated that the RPG books are not considered canon:

Q: Are the Warcraft and World of Warcraft RPG books considered canon?
A: No. The RPG books were created to provide an engaging table-top role-playing experience, which sometimes required diverging from the established video game canon. Blizzard helped generate a great deal of the content within the RPG books, so there will be times when ideas from the RPG will make their way into the game and official lore, but you are much better off considering the RPG books non-canonical unless otherwise stated.

Many of the creatures and some of the lore expand beyond what appears in the computer game.

Most of the books are placed chronologically before World of Warcraft, and authors in-universe such as Brann Bronzebeard cover many alternate legends believed by the people of Azeroth. Many of the books are located at earlier points in the timeline, and the culture, population factors, and other historical events have taken place or changed since the point in time that they cover.

Many cultures have changed since the period of time when the RPG books take place, and even between the events of the books. Some cultures mentioned no longer exist at the time of World of Warcraft, and some cultures existed thousands of years before or during the War of the Ancients. Some material first introduced in the RPG was expanded upon later in other sources such as novels and manga.

Loss of the license

White Wolf has lost their license for the Warcraft line.

"All the books under our license agreement for Blizzard for this product line have been released. The last one having been this summer. So while we will not be supporting a forum here, I have conferred with the company internally and we recommend reaching out to Blizzard for replacement RPG support resources. We have a limited number of forums we can launch with due to the license we have for this software right now which also limited our options here so the decision was to focus on our core products."[citation needed]  source removed

Several of the posters on the White Wolf Warcraft RPG forums (which were removed from the list of White Wolf forums) started a new forum; some of these members include Jeff Moller, one of the developers of the book Dark Factions. The new forums can be found at: http://wowrpg.11.forumer.com