From Wowpedia
(Redirected from Warcraft The Roleplaying Game)
Jump to: navigation, search 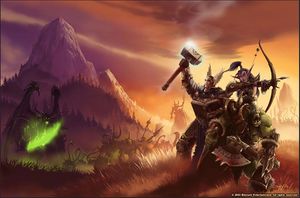 The book was initially published in 2003 under the d20 System License and was basically a campaign setting for the revised 3rd edition of Dungeons & Dragons. It lacked detailed character generation or advancement rules (which could be found in the D&D Player's Handbook, Dungeon Master's Guide, and Monster Manual rulebooks) and instead concentrated on describing the setting. The book contained several short stories approximately 2-3 pages in length.

Over 8 million fans around the world have enjoyed the #1-selling Warcraft® RTS (real-time strategy) computer game series. Dungeons & Dragons® Warcraft® the Roleplaying Game translates this hugely successful series into a fully interactive print roleplaying game world. Play humans, dwarves, high elves and night elves — or even inventive goblins, shamanistic orcs and mighty tauren — as you strive against the demonic Burning Legion and undead Scourge for dominance over the war-torn world of Azeroth.

A World of War and Magic
The D&D Warcraft® RPG is published under the Open Game License and is 100% compatible with the Dungeons & Dragons® revised 3rd edition rules and the d20 system. The game setting features brand new core classes and prestige classes, including the scout and warlock, plus other unique elements like firearms and other industrial technology that add an exciting new element to fantasy roleplay.[1] 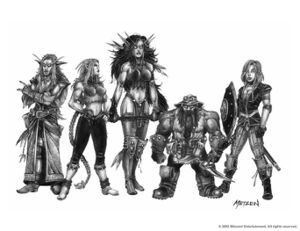