This article is about the class. For the reputation faction, see The Wardens. For other uses, see Warden (disambiguation). 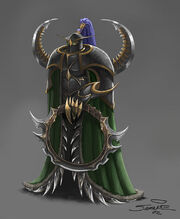 Concept art from The Frozen Throne

“May the night shroud you in shadow, and the moon illuminate your enemies.”

The mysterious wardens serve as the night elves' special police force in Kalimdor.[1] They are elite members of the Watchers, the jailors, and marshals of night elf society,[2] and the highest rank that can be bestowed on a Watcher.[3] Maiev Shadowsong was first to be given the rank of warden, which she later awarded to a select few who had proven their exceptional fighting abilities, tracking skills, and tenacity.[2] 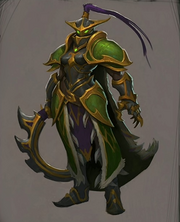 Set apart from the militant Sentinels, wardens are usually employed as jailors, assassins, and bounty hunters.[1] When loosed upon escaped criminals, wardens employ a number of supernatural powers that enable them to recapture their prey and mete out the night elves' justice. Wardens have a line of sight teleport ability called "blink," which they can use to outmaneuver even the quickest of foes.[1] They notably wield umbra crescents and typical glaives. They also use owls for recon.[4]

In Warcraft III: The Frozen Throne, the Warden is a playable hero unit. The Warden can cast Blink, Fan of Knives (point-blank Area of Effect), Shadow Strike, and can summon an Avatar of Vengeance that can resurrect dead units as Spirits of Vengeance.

Maiev Shadowsong, the only warden to appear in the campaign, led a group known as the Watchers.

The wardens have a presence at the Molten Front in the Firelands as the Shadow Wardens. Their leader commands Barrow Deeps Watchers that were left on Hyjal.

A contingent of wardens, including Cordana Felsong, was sent by Maiev Shadowsong to accompany and protect Archmage Khadgar on the alternate Draenor.[5] Cordana was, however, corrupted by Gul'dan and joined the Burning Legion's side.

The wardens have a presence on the Broken Isles as a faction. After Maiev was captured by the demons, Sira Moonwarden became the Wardens' leader in her absence.[6]

Following the War of the Thorns, several night elven wardens were slain and raised into undeath by the Forsaken. Embittered that Elune and the night elves had allowed such a fate to befall upon them, Dark Wardens such as Sira Moonwarden now serve the Forsaken to get vengeance.

The wardens participated in the Battle for Darkshore, where Maiev and Sira served as the commanders of the Alliance and Horde forces. Under Maiev's leadership the Alliance claimed victory,[7] while Sira and her forces escaped.

In the aftermath of the Fourth War, Sira abandoned the Horde to serve Sylvanas Windrunner,[8] and it is unknown if the Horde still has wardens in their service. The wardens are the most feared arm of the night elves' wrath. These mystical assassins mete out justice, capture fugitives and carry out covert executions. Trained in martial arts, wardens command a fearsome and formidable range of abilities. Using a combination of cunning, stealth and tactical planning, a warden can shake even a large fighting force to its core.[9]

They are stealthy and mystical individuals, using their shadowy abilities in ways much different than the Sentinels. They are adept at entering and exiting combat quickly and have a number of attacks that can quickly disable their opponents. Many wardens are women, though not all of them. Wardens dress in dark colors and favor cloaks, which move about them like shadows to further hide their presence. Wardens are deadly melee combatants, able to bring their opponents to their knees with a few quick attacks, then teleport to safety.

Wardens are members of night elf culture and society. Many wardens are night elves and are members of the Alliance. They have been valuable additions to the night elves' military for millennia. Theirs is an ancient tradition, focused on justice. In addition to some of their other roles, wardens ensure that law is kept in night elf lands. In modern times, they focus their skills on furthering night elf interests in the larger world, and keeping peace in northern Kalimdor. Historically, wardens are the most feared jailers and bounty hunters in night elf society. They keep watch on the most dangerous prisoners. If a prisoner escapes, wardens set out to retrieve him/her/it.

The most (in)famous warden is Maiev Shadowsong, the woman responsible for keeping the most dangerous prisoner in night elf history — Illidan Stormrage. Maiev failed in her duties, as all know, and hunted Illidan across Azeroth and Outland to retrieve him. Her hunt and failure embittered her, and when Illidan bested her in Outland, Maiev died alone and hollow on an alien, red world, or so it was believed. In fact, she was actually captured by Illidan however she breaks free with aid from Akama and aids a group of adventurers slay Illidan. After which her fate is unknown as she admits that without him she is nothing.

Despite Maiev's failure, many young wardens see her as the epitome of dedication. Though her charge escaped, she pursued him across the worlds, giving up only when "death" prevented her from continuing her chase. Other wardens view Maiev with ambivalence, seeing her single-minded focus as responsible for her failure.

Wardens traditionally remain in the night elf homeland, protecting their race's interests. Other wardens, usually young ones who learned their skills since the Third War, head out into the larger world as adventurers. They still seek to further night elf interests, perhaps by destroying demons and other traditional enemies. Others are on missions to capture certain individuals or groups of individuals. They may be charged with returning these creatures to Darnassus, or they may leave to slay them.

They are night elf only, but it is conceivable that a night elf could teach the skills of a warden to a member of another race, but so far as anyone knows, this has never been done. All current wardens are members of the Alliance, though it is possible that a warden might break from the Alliance after learning her abilities. Night elves certainly don't train wardens who are not loyal to them.[10]

As the night elves special police force, they are tasked with maintaining the laws of their people and with pursuing and capturing their fugitives. Though staunch members of the Alliance, wardens are rarely seen outside night elf lands unless sent on a specific mission. When pursuing fugitives, however, they may work with other Alliance forces and can prove invaluable when navigating night elf territories. More than one Alliance commander has felt some disquiet upon meeting these fiercely independent, accomplished, focused women, but that discomfort often changes to admiration and even appreciation upon seeing the warden at work. Wardens often target key enemy figures who have attacked the night elves before, and their presence near a battlefield often means the upcoming elimination of a significant threat. Sometimes a warden allies with an Alliance force, staying with them and eliminating each major opponent the Alliance commander indicates. This usually occurs around night elf lands, where any invading force is a threat to their society.[11]

The warden's magic is drawn from conviction and belief in justice for the night elves. One of the deadliest abilities of the warden is her power to imbue a weapon with the wrath and justice of the night elves, upon a slashing or throwing weapon that she holds. The ultimate expression of the warden's spirit of justice and wrath is the summoning of a night elf spirit of vengeance.

A warden can unleash an arsenal of blades and knives upon the unsuspecting. The warden can magically split a thrown knife to let loose a cascade of cutting terror upon her quarry.[12]

Specially chosen wardens wield these circular slashing blades. The serrated, hoop-shaped moon sword is a deadly weapon for both subduing and executing the warden's quarry. In World of Warcraft, those blades have slightly-shining green aura.[13]

Specially constructed for the night elves' wardens, these green velvet cloaks bear a fringe of deadly, razor-sharp blades along the hem, resembling the wings of an owl. Wardens learn to shift and swing the cloak dramatically, presenting the blade fringes to anyone who might get too close. The cloak is both a defensive measure against sneak attacks and a potent weapon for the warden when surrounded by enemies. It also provides numerous knife blades for the warden to use with her slicing torrent ability.[14]

Watchers and The Wardens