From Wowpedia
(Redirected from Wardrobe)
Jump to: navigation, search 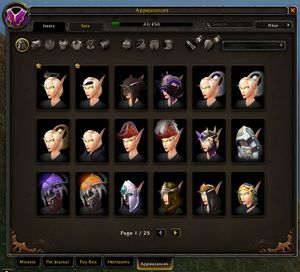 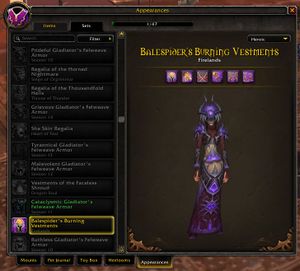 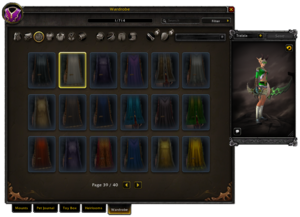 An early look at the Appearances UI

Appearances (also known as Wardrobe) is a transmogrification feature introduced in World of Warcraft: Legion that enables a player to collect and save equipment appearances (including weapon enchants) account-wide. This frees up inventory room by not requiring the player to hold onto an item in order to use it again later, nor hold onto a copy of it for each desired character on the account.

To learn appearances, players must acquire soulbound items that the bound-to character can equip. When first logging into a character after Patch 7.0, the appearances of appropriate items in the character's bags, bank, and Void Storage were learned automatically. Additional appearances were unlocked based on previously-completed one-time quests.

A Blizzard developer posted this short questionnaire that can be checked against to see if an item's appearance can be learned:

Answer yes to all four questions and your character will learn the appearance.

As with pre-Legion transmogrification, there are some items that are not transmogrifiable or can only be transmogrified during certain time periods:

Collections of enchantment appearances and PvP season gear were added in Patch 7.0.3 in an attempt to make gathering some old sets of appearances much easier to accomplish, as well as to enable the use of sub-40 transmog sets that changed from mail to plate or leather to mail in the patch.