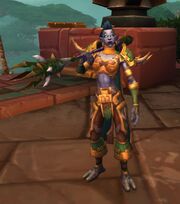 Loti in World of Warcraft.

This section contains information that needs to be cleaned up. Reason: Typos, missing words and commas.

Beloved by the youth of Zandalar, Wardruid Loti earned her place on the Zanchuli Council through the demands of the next generation of warriors and hunters. Some credit the decision of Gonk to allow the Zandalari the worship of many loa, not just himself. This progressive movement, championed in voice by Loti, aided in the resurgence of druidism as a cultural mainstay of Zandalar.[2]

After Yazma spied reported that dark heresies were being practiced the Zanchul, King Rastakhan sent Loti and her husband Hexlord Raal to do deal with the situation. Following the arrival of the Horde to Zandalar Yazma directed the newly named Speaker of the Horde to aid them as she felt the two were too soft on their own followers and that the Speaker would be more ruthlessly neutral.[3] Loti accepted the aid of Speaker and instructed them to kill Crimson Cultists for practicing blood magic and to then to tell instruct her husband to get off his perch to help keep the Zanchul secure.[4] For his part Raal was unimpressed with her calling him out and accurately predicting his wife's actions. Declaring such actions barely a half measure Raal explained that the blood magic came from the old ways and had the Speaker join him to patrol the border to Nazmir, so the Speaker could see where the blood magic was coming from. As the patrol came to an end Raal sensed a great power resonating within the Zanchul itself and subsequently sent the Speaker to group with Loti.[5]

Upon being informed of the situation Loti accused her husband of trying to win the Speaker over and responded by blessing them with the power of Gonk, while instructing them to deal with the Bloodraged Pterrordaxes, who were driven mad by some dark ritual, and to shoo away the Pterrordax Hatchlings, who were swarming courtyard of Zanchul.[6][7] Feeling that Loti was more interesting in recruiting than dealing with the blood troll treat, Raal then blessed the Speaker with the power of Pa'ku and instructed them to deal with the corrupted guardians.[8] After discovering the source of the corruption was a ritual in which blood magic heretics were empowering the dire troll Dregada, Loti, Raal, and the Speaker united to put the ritual to an end by killing Dregada.[9] With the threat removed Loti declared that while she won't hold a grudge, she'll be damned before letting the Speaker double dip with the loa and called upon them to choose between Gonk and Pa'ku. Should the Speaker pick Gonk Loti would declare that they choose wisely and then directed them to ride with her in order to meet their patron.[10] Despite her declaration she instructed the Speaker to meet with Gonk in the Garden of the Loa, as she continued to deal with the heretics in the temple.[11] After happily noting that Gonk hadn't ripped out their throat Loti declared it was time to show the public their choice[12] and inform King Rastakhan.[13]

After Zul started his coup he directed his forces to gain control of the Zanchul and in the process Loti was captured. Hexmother Kala sought to use Loti's fetish in order break her will and corrupt her to their cause. However Kaza'jin the Wavebinder enlisted the aid of the Speaker in freeing Loti while dealing with the traitors in the Zanchul, to which Loti remarked their deaths werea start.[14][15] In light of Yazma siding with Zul, Loti ordered for the Eyes and Ears to be dealt with to prevent the rebels from knowing their every move.[16] She also ordered for the death of Crazzak the Heretic, who was using the captured Raal's connection with Pa'ku to weaken the loa.[17]

After Raal revealed that Yazma and Vol'kaal had pulled most of their forces to the Garden of the Loa, Loti, Raal, and the Speaker headed to there in order to rescue the loa.[18] Feeling that Gonk was in danger Loti declared it was time to repay Gonk for saving her life so many times and headed off to personally rescue Gonk, only to discover that Gonk had personally killed those who had come for him.[19] Loti was stunned after learning that Shadra was consumed by Yazma and was horrified to learn that the heresies committed in Zul'Drak, were done in Zuldazar.[20] Remarking that the Zanchuli Council she instructed the Speaker to inform Baine Bloodhoof of what had transpired in order to secure Horde support, as she and Raal rallied what support they could before they grouped with Rastakhan at the Zocalo.[21]

Loti was among the many who joined the great hunt for Zul and his forces.[22] Discovering that Zul's forces had secured the Temple of the Prophet Loti directed the Speaker with discovering if Zul had recorded any of his visions. To her surprise not only had Zul recorded them but they revealed that he intended to resurrect Dazar, the first king of the Zandalari Empire, causing her to wonder if Zul could even be called a Zandalari anymore.[23] After Zul's forces at the Temple of the Prophet were thinned out Loti joined with Raal, who revealed that Rastakhan and Rezan had rushed on ahead causing the group to rendezvous with them well giving their king air support.[24] During the confrontation with Zul Rezan was slain which forced the Zandalari forces, Loti among them, into retreat.[25]

Loti was among the many defenders of Dazar'alor when Zul, his loyalists, mogu allies, Faithless sethrak, and Mythrax the Unraveler attacked the city as they sought to break the final seal in order to release the old god G'huun. Ultimately the city would be saved, Zul slain, and the seal broken freeing G'huun, who was slain sometime later.[26][27]

After receiving word that the Alliance had mounted an attack through Nazmir, Talanji conferred with her father about how to deal with this new threat.[28] They determined that while Rastakhan would defend the city, Talanji herself would lead the armies of Zandalari against the Alliance. To that end she enlisted the Speaker of the Horde with rallying the Zandalari.[29] Loti was among the Zandalari who remained behind with Rastakhan and defended the city when Alliance invaded. During the battle, Rastakhan was slain and Loti was among the many to attend his funeral.[30]

Sometime after the death of her father, Talanji created a new Zanchuli Council consisting of Wardruid Loti, Hexlord Raal, Jo'nok, Bulwark of Torcali (replacing Vol'kaal), High Prelate Rata, General Rakera (replacing Jakra'zet), and Lashk, the first tortollan to sit on the Council.[31] During the ritual of queens and kings, Loti and the rest of the Council were attacked and imprisoned in webs by Samara, the White Widow, as they were giving Talanji their blessings. Upon the death of Samara, the Zanchuli Council was freed and finished their blessings, after which Talanji moved forward.[32] After Talanji passed the rest of her trials, she was declared the Queen of Zandalar and formally joined the Horde as its equal.[33][34] Following these events, Loti declared that while Talanji tolled away at restoring their empire, the Zanchuli Council had been tasked with seeing that the faithful of Zandalar gave her the time to do so. Though acknowledging how there are still whispers of doubt among the priesthood, Loti was confident that they would see Talanji's worth as a leader as she has done.

I am Wardruid Loti! I am de conduit of Gonk, loa of shapes and master of de hunt.
I am also a member of de Zanchuli Council, but you knew dat already I'm sure.

During Web of Lies questline
When I get my claws into Yazma and her spider cult... oh, dere will be blood.

While Queen Talanji toils away at de long task of restoring our empire, de Zanchuli Council has been asked to see that de faithful of Zandalar give her de time to do so.

There are still whispers of doubt among de priesthood, but in time they will see Talanji's worth as a leader. I already have.

In the Hearthstone expansion Rastakhan's Rumble, Loti serves as the champion of Gonk's Raptors, a dinosaur-themed team of troll druids, and appears as a legendary druid card. Her flavor text reads: "“Ravasaur!” “Pretty scary” “…Blammodax!” “Is that a thing?” “SMAXODON!” “….now you’re just making those up.”"