From Wowpedia
(Redirected from Warfronts)
Jump to: navigation, search

Warfronts are large-scale, 20-player cooperative PvE scenario confrontations, where the heroes' objective is to claim a key strategic location for their faction. Players build up their faction's forces, lead the charge as their troops lay siege to the objective, and battle enemy commanders as they make their last stand in this epic mode inspired by classic Warcraft RTS battles.[1]

Special armor sets are rewarded for participating in warfronts. 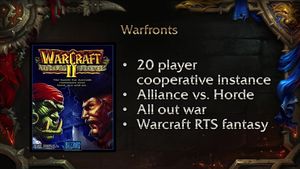 The goal is to have a rotation of different locations by the time all the patches are out.[2]

Similar to the RTS games that this feature pulls from, players will need to gather four types of resources: Leather (Warfronts),

In the live version of warfronts, only

[Wood] are resources which the players have to gather. Food (Warfronts) and Leather (Warfronts) seem to have been scrapped during development.

Please add any available information to this section.
...

Construction Tables are located in front of individual buildings that can be built in a Warfront. For the Alliance in the Battle for Darkshore, they are replaced by Verdant Seedlings.

Players will have to establish a base that they will expand by gathering resources, similar to how it was done in Warcraft III. Every player will be able to deposit their resources in the building they wish to build, and when it has enough, it will be automatically built by peons for the Horde, and peasants for the Alliance. It would be advised if players agreed to build a building together, as if they do it this way it would be built much faster.

Once the buildings are done, you will be able to create an army, like in Warcraft III, that players will lead against the enemy, and also to defend the base against any attack. The objective will be taking down the enemy Commander, but be aware as there are different types of commanders. A dwarven commander may have upgraded rifleman while a human commander may have upgraded knights.

Once the enemy base is destroyed and the commander killed, you would have won the Warfront.