For lore about warlocks, see Warlock.

If the energies of this world can be used for destruction, then the energies of the underworld could destroy Azeroth. It is this destructive power that the Orcish Warlocks use in their incantations and rituals. As the most powerful of the Orcish sects, these dark brethren of Hades go where none others dare in search of ultimate power. Their Towers hold the keys to unleashing the very essence of evil upon those they see as a threat to their devious plans. Spells that channel the fire and brimstone of hell through their bodies, or can summon forth great creatures - even daemons - are theirs to use.[1]

Warlocks are the most advanced unit, such that they can even summon new units. They are quite weak and vulnerable, and chances are that they will die if a melee unit manages to get close to them, so they must be protected. Warlocks are very expensive and easy to kill, so sometimes it is better to leave them at the base and make them summon Daemons from there.

The fires of hell rise up to meet the enemies of the Warlock clan. Their sorceries are rooted in the deepest pits of the underworld, and their command over flame and the monstrosities they create is a cause for great fear to their victims.[2]

The basic fire spell which all followers of the Orcish cults (the underworld) first learn. It channels the flames of Hades through the caster's body, allowing the wielder to direct it as a missile at anyone he chooses. It is a dangerous magik to employ, but the effects seem to delight even the lowest circle of Warlock to no end.[2] 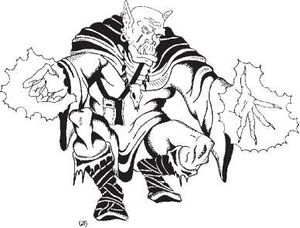 A Warlock as seen in the Warcraft: Orcs & Humans Manual.

The Warlock calls forth hordes of deadly, poisonous spiders to aid him. Several spiders come at any one summoning, and will swarm over the enemy as the caster directs. They crawl through gaps in the enemies armor and bite them with their poisoned fangs, injecting their deadly juices into the bloodstream. As the enemy falls to the ground, he literally burns from within.[2]

Cloud of Poison
Creates a moving poisonous cloud on the selected area dealing constant damage to the units and buildings in the area for a short while.

The caster creates a cloud comprised of brimstone, acid, and poisonous gases to envelop and choke his targets. This foul stench eats through anything that stands in its way, and chokes the very life out of anyone unlucky enough to be in its path. It is a mix of the sickly stench of rotting corpses and the essence of evil, designed to decay and corrode all that it comes in contact with.[2]

The most powerful spell ever rumored to exist. Legends say that the caster would have the ability to summon forth a daemon by allowing his body to be sacrificed to enable its existence in this plane. The daemon would then be guided by the spirit of the caster to do his bidding, but should the daemon be destroyed, the warlock's life would be forfeit. The truth to this tale is questionable, but the incantations and rituals used to summon the creature may lay in some lost runic writings. The dream of every follower of the underworld is to rediscover these incantations and be able to command the power of the Daemon.[2]