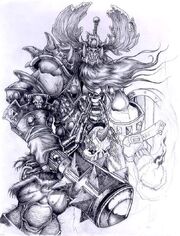 The Warlord was a scrapped orc hero unit from the Warcraft III alpha.

The unit was ultimately cut when it was decided that each race would have only four heroes, but it still made an appearance in the campaigns as the Slave Master. It is also used in the WarChasers official map as a Beast Knight.

In the alpha version of the game it had the following abilities: Death Scream, Raging Scream, Command Aura, the last of which was used in several "leader" neutral units like the Furbolg Ursa Warrior, the Gnoll Overseer and the Tuskarr Chieftain.