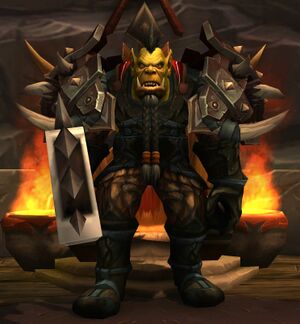 Bloodhilt was personally sent by Warchief Garrosh Hellscream to evaluate the Horde's progress in the Southern Barrens. Bloodhilt was appalled that the Alliance were able to capture Honor's Stand and sack Camp Taurajo, while Warlord Gar'dul was in charge of the Horde forces in the area. When Horde adventurers encountered him in Vendetta Point he ordered them to destroy the siege weapons outside of the Great Gate and kill Alliance looters in the Ruins of Taurajo. Impressed by the adventurer's strength, Bloodhilt sent the adventurer and his vanguard to inform Gar'dul that he was coming to Desolation Hold.

While the nervous Gar'dul was able to convince the adventurer to arrange for a private meeting in the northern tower in Desolation Hold, Bloodhilt arrived. After arriving at the tower he and Gar'dul had a short exchange where Gar'dul claimed that he had been reinforcing the Horde's grip in the Southern Barrens. Bloodhilt correctly pointed out that it was the adventurer that helped reinforce the Horde's control in the region. Gar'dul mentioned that the Alliance had gained reinforcements from the Eastern Kingdoms and that he had been cut off only to be interrupted by Bloodhilt who relieved him of command. Enraged, Gar'dul refused and attacked Bloodhilt and the adventurer, yielding when beaten. Bloodhilt, enraged that Gar'dul yielded, asked him what part of "Victory or Death" did he not understand before throwing him out of the tower window to his death.

Warlord Bloodhilt then assumed command of Desolation Hold and sent adventurers to claim the region for the Horde. He also ordered the assassination of the Butcher of Taurajo, General Hawthorne.

He left Desolation Hold when the Horde headed for Krasarang Wilds in Pandaria. He was put in charge of the Dominance Offensive by Warchief Garrosh Hellscream and controls his forces from Domination Point and can be found at the top of the main building. Hellscream has also tasked him to keep a close eye on the goblin and blood elf reinforcements he sent him as Hellscream distrusts their leaders. Bloodhilt too was distrustful of the blood elves as well as the goblins.[1]

During the Domination Point scenario, the Alliance's 7th Legion attacked the base and Bloodhilt, Nazgrim and what remains of his vanguard team, and Horde adventurers successfully repelled the Alliance invasion. Bloodhilt's forces also attacked Lion's Landing.

He was then replaced as Warlord of Desolation Hold by Crawgol.[3]

Barrens
Make this quick, <class>. The Warchief personally sent me to evaluate our progress in the Barrens, and when I get here I found our towns aflame and Alliance dogs running amok.

Krasarang
Good timing. Here they come again!
If the Alliance thinks a few reinforcements are all it takes to conquer MY fortress, they've got another thing coming!