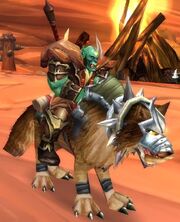 Warlord Gorchuk is an orc located at the Scarab Dais in Silithus alongside Senior Sergeant Kai'jin during the Call of the Scarab micro-holiday. Gorchuk, along with his Alliance counterpart Field Marshal Snowfall, is a callback to the massive item funneling that took place during the War Effort to open the Gates of Ahn'Qiraj. As his gossip text hints at, players on the entire realm ended up focusing their efforts to get a single player his or her

[The Scepter of the Shifting Sands] to bang the gong and start the war.

Horde war effort still ongoing
Throm'ka, Horde <Class>, stand proud! I am Warlord Gorchuk, commander of the Horde's war effort. There are trying times ahead of us, but we shall prevail, as always.

If you have questions, you should ask them.

We stand together with the Alliance, <race>. An evil, so old that the world has forgotten it, seeks to engulf us all; first on Kalimdor and then the rest of Azeroth. It is driven by a hatred of all things born of the great Shapers: The eternal Titans.

We are all that stands in the way of C'Thun's armies. We will strike first and bring down the forces of Ahn'Qiraj. Let all of Azeroth quake at the combined might of the Horde and Alliance.

How many metal bars have the Horde collected so far?

How many herbs have the Horde collected so far?

How many leather skins have the Horde collected so far?

How many bandages have the Horde collected so far?

How many cooked goods have the Horde collected so far?

<Class>, the Horde has gathered all that it needs for the Ahn'Qiraj War! Now we wait for the puny Alliance to catch up. When they do, we'll begin transporting everything to Silithus. It should not be long after the buildup there is completed that the war will begin!

The time for war is almost upon us, <class>! Both the Horde and the Alliance have finished with their preperations[sic]. All of our war materiel is being shipped to Silithus as we speak. I'd expect it all to arrive within 5 days. When all is assembled there, the one who has completed the arduous task of reassembling the Scepter of the Shifting Sands will bang it agains[sic] the Scarab Gong and open the gates to Ahn'Qiraj. Then battle shall be joined as has not been seen in ages!

On this day, many years ago, a hero by the name of Kalahad rang the Scarab Gong, opening the gates to Ahn'Qiraj and beginning a war the likes of which Kalimdor had never seen.
Today, we celebrate the heroics of those past adventurers by returning to Silithus and walking in their footsteps.
What's more: this is a competition between of[sic] the Horde and Alliance. Whichever group can earn more credits over the next 24 hours earns the right to fly their flag next to the gong for the rest of the year.

Disrupt the Twilight's Hammer camps, and strike at their Abyssal High Council!
Slay the mighty silithid colossi that dwell in each of the three large silithid hives.
Gather silithyst, a valuable red spice, for our faction.
Venture into Ahh'Qiraj itself and deal with the qiraji and old god menaces that dwell inside!
Even adventurers that prefer not to fight can participate by donating war supplies, in the form of meat, to our cause.

Yes, both the Medallion of Station and Ring of Lordship are expensive - far too expensive for any one person to purchase on their own.
I suggest you team up with other adventurers and select a champion. Only one medallion or ring is required to summon the high-ranking members of the Abyssal Council - but many heroes will be required to defeat them.
Good luck.

He was a level 60 located in the Valley of Spirits in the orcish city of Orgrimmar. He was responsible for collecting supplies donated by the Horde in order to open the gates to Ahn'Qiraj.

NOTE: He was only available during the Ahn'Qiraj War Effort world event. By speaking with him, members of the Horde could learn more about the war, as well as find out how many of each war effort resource had been collected thus far.

He may be part of Orgrimmar Legion.