Not to be confused with Goretooth. 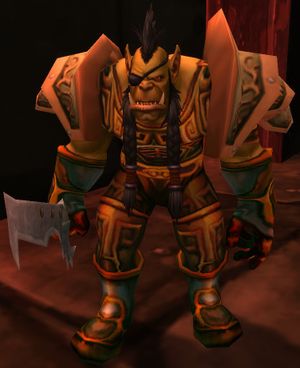 Warlord Goretooth in World of Warcraft. 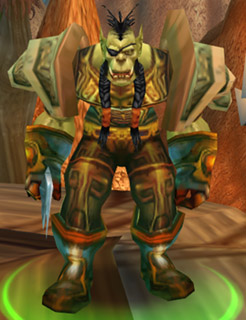 Before the Cataclysm, he could be found in Kargath in Badlands.

While in the Badlands he would sometimes dispatch the Kargath Expeditionary Force led by Thal'trak Proudtusk, then turn to Hierophant Theodora Mulvadania and Shadowmage Vivian Lagrave at the bonfire, flirting with them. He would then return to his post on the watch tower.

I am a warrior of the Horde, <name>. It fills me with rage to know that our enemies sit in a fortress, less than a day's ride from Kargath, plotting against us.

How I long to break free from the bonds of duty and destroy them all in the name of the Warchief.

Alas, we all have roles we must fulfill.

Truly, I envy you: To battle in the name of the Horde, at the forefront of conflict. Mine is a job of command.

Certainly, in my youth, I lived out the dreams that make my old age bearable. I now revel in the glory of victory, the bitter taste of defeat - all through the soldiers I command.

I dream, <name>... oh yes, I dream. In my dreams I die a thousand times in a thousand different ways. Some would call dreams such as mine nightmares. NOT I! In dreams I die in the thick of battle. For each single death of my own, ten thousand enemies of the Horde fall before me. It is glorious!

I pray for such things.

Aye, I could tell just by looking at you, <name>. You remind me very much of myself as a young warrior of the Horde.

You will undoubtedly go far in life and even further in death.

I do not deserve such praise, Warlord Goretooth.

Are you prepared to enter the fortress of the Blackrock orcs? To wreak havoc? To tear asunder the foundation of the mountain citadel?

Sir! Until my body ceases to function!

I did not doubt you for even one second, <name>.

Here are your orders, <name>. I know that you will not let me down.