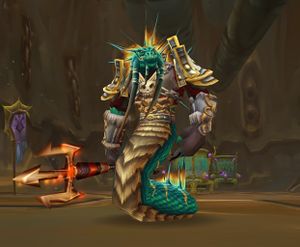 Kalithresh was the leader[2] and overseer of the Steamvault, in Lady Vashj's domain of Coilfang Reservoir. In order to defend the Steamvault, Kalithresh relied on a number of potent mixtures. His seat of power was lined by a series of tubes containing rare liquids, which could be used to augment his already significant strength. Ultimately, however, his power was of no avail, since he was killed by adventurers associated with the Cenarion Expedition.[1]

Deep within the Steamvault, the naga have begun experimenting with a mysterious substance to strengthen their warriors and purge them of fear. Kalithresh was one of Lady Vashj's first servants to volunteer as a test subject for this dark elixir. As reward, he has been charged with guarding the expansive Steamvault and ensuring the region's arcane machinery operates without interruption.

As the last boss of the max-level Coilfang wing, Kalithresh is an appropriately difficult and time-consuming fight; a gear check/DPS race with a twist. Around 600 DPS per DPS class is a good number; assuming three DPS and a tank, this will end up with a combined group DPS output of around 2.2k, which will destroy the containers in a little under five seconds.

He is fought in a room lined with containers called Naga Distillers, full of some unknown substance. The party must keep up steady DPS on him, as he has a fairly large amount of health, and he periodically reflects magic. His only other ability of note at this point is a randomly targeted Impale, which does 500 damage every 3 seconds. If he retargets someone before their Impale wears off, it will stack and refresh the duration, so healers must be paying attention.

Every so often he shouts and begins to channel a spell to the closest Naga Distiller near him. At this point, the container becomes targetable, and the party must attack it. Note that the Warlord continues attacking while channeling, so the tank will still be taking damage. However, if he is not enraged his damage on any average geared tank will be negligible, so it's recommended everyone in the party moves DPS to the Naga Distiller, including the healer. It is imperative that the container be destroyed before he finishes channeling (10 seconds). If he manages to get the spell off, he enrages, increasing his attack speed by 75% and his damage by 70%. This ability will stack if more containers are not destroyed. Since they are only targetable while he's channeling, there's a certain urgency to this fight. As he will use this technique on the container close to him, a good technique to killing the containers quickly is if the tank places the boss next to each container. That way you maximize the time you have the whole group attacking the container. Just make sure you have someone healing the tank. As long as the party manages to kill each container before Kalithresh powers up from it, he will remain under control and easily handled. The Naga Distillers have about 10,000 hitpoints each, so its best to have all DPS and the tank switch to containers when it becomes available. If everyone is on it quickly, it only takes a few seconds to kill, so you shouldn't lose aggro. Then pull him to the next closest container, so you know which one he will target next. Rinse/repeat till he's dead.

Dagger rogues: because DPS on the Distillers is probably the single most important aspect of this fight, and the time spent running around the tanks to try to find the "back" can mean the difference between an enrage and a broken Distiller, dagger rogues should rotate their camera so they can see the top of the container: a star indicates the "front" of the tank, so standing on the opposite side will enable dagger rogues to backstab and maximize their damage.

If you notice that your party doesn't break the containers fast enough, you can use this macro. It will mark the container with the Skull raid icon and send a Raid Warning to the party.

How to tank the boss

There are two common methods on how to tank the boss.

1) Choose which container to tank the boss near. Tank him near there. Make sure that container is the closest to the boss but also be far enough away that it will take him time to get there. This works best when you have more melee dps than ranged dps as the melee dps will not have to run as far.

2) Fight the boss in the center of the face on the floor right around where the mouth is open. Doing this situates him equidistant to all the containers and works best when you have more ranged than melee dps. The normal order which he typically follows for the containers is back left, front left, back right, front right when you are facing the boss before the fight.

Facts about the containers: The channeling will not begin until the boss gets to the container yet the container is targetable when the bosses chooses it. No matter what, the dps stop what you are doing to attack the container. Each of the tanks has 10000 hp in normal mode.

As a variant, once you have 2 or 3 containers in the same area destroyed, tank him there and use some method of slowing his movement, such as a hunter trap. When he goes for the next container, which will be further away at this point, you'll have an extra 2–3 seconds to destroy the container. During this time the tank should intercept the container and all DPS switch target. Mostly this technique works best for groups with ranged DPS. The more containers you destroy, the further he has to go to get to the next one, and the more time you gain from the trap-kite.

This fight in heroic is more or less the same, except that he hits harder, has substantially more hitpoints and each of the Naga Distillers has 14000 hp (a 40% increase from normal mode)

At level 80 (and higher), Kalithresh (and the instance as a whole) can be soloed. With good gear and DPS, you will not need to break the containers, and can probably burn Kalithresh down before be finishes channeling the first. Even if he does enrage, basic healing (or potions) can save you long enough to finish him off.

Intro
You deem yourselves worthy simply because you bested my guards? Our work here will not be compromised!

Regenerate
This is not nearly over...

Death
For her Excellency... for... Vashj!

It is speculated that the mysterious liquid might have been a weapon Vashj's Naga were developing to increase their martial prowess.