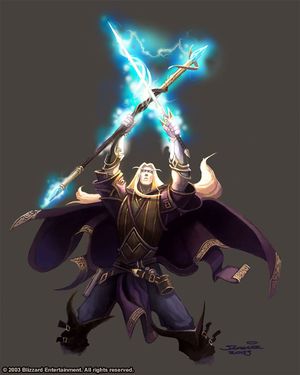 Warmages (also spelled as war mages and war-mages or war wizards) are a kind of magi from various races mostly of high elves, humans and ogres.

Warmages are arcane spellcasters who accompany soldiers into the heart of battle. The generations of warfare on Azeroth have given warmages time to hone useful spells into simple and secret rituals, called "battlemagics", which are passed from warmage to another. Warmages are proficient with all simple melee and ranged weapons, and light armor. They can wield a sword in one hand, and a staff in the other. Armor of any type interferes with the warmage's arcane gestures, which can cause his spells to fail (if those spells have somatic components). As warmages accompany warriors into battle, they become better at defending themselves than other wizards. They develop greater martial skill in the crucible of battle.[2]