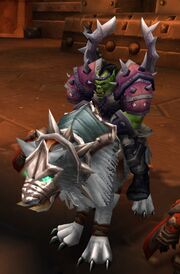 Warmaster Zog is a former Horde ambassador once found in the Military Ward within the dwarf city of Ironforge, but has since become Warmaster of the Horde serving as the Garrison Mission Specialist for Horde players.

Zog was a strong orcish soldier who became one of the most trusted lieutenants of Thrall.[citation needed]  When the silithid threat was growing greater with each passing day, supplies were needed on the front lines in Kalimdor: food, metals, herbs, and all manner of materials. Orders came in every day, calling for more to be sent. General Zog was sent as an ambassador of the Horde to Ironforge to coordinate the efforts of the Horde and Alliance. During the war effort, he could be found at the Military Ward, always protected by two Ironforge Guards to ensure his security, informing soldiers of the Alliance of the Horde's progress on the task at hand.

He organized the Alliance and Horde to face off against the silithid at the Gates of Ahn'Qiraj.[1]

Zog, now with the title Warmaster, was sent by Warchief Vol'jin to the Horde's Garrison in Frostwall. He serves as the Mission Specialist. He also sent the adventurer to rescue Olin Umberhide from captivity.

After the Horde assaulted Magnarok, Thrall requested Zog to send additional forces to the area.[2]

Horde war effort still ongoing
Lok'tar, <race>. I am General Zog, ambassador of the Horde. I am here to keep you appraised of the progress that the mighty Horde is making in their efforts towards the Ahn'Qiraj War. What is it that you want to know?

We stand together with the Alliance, <race>. An evil, so old that the world has forgotten it, seeks to engulf us all; first on Kalimdor and then the rest of Azeroth. It is driven by a hatred of all things born of the great Shapers: The eternal Titans.

We are all that stands in the way of C'Thun's armies. We will strike first and bring down the forces of Ahn'Qiraj. Let all of Azeroth quake at the combined might of the Horde and Alliance.

How many metal bars have the Horde collected so far?

How many herbs have the Horde collected so far?

How many leather skins have the Horde collected so far?

How many bandages have the Horde collected so far?

How many cooked goods have the Horde collected so far?

As expected, the Horde has completed all of their preparations well in advance of you and your so-called Alliance. You are all holding us up as we cannot take final measures to begin the war until you finish your promised responsibilities.

Unexpected that you are all capable of such organization. Both the Alliance and the Horde have completed their preparations for the Ahn'Qiraj War. Even as we speak the material is being shipped over to Silithus and should all arrive within 5 days. Then it is up to the one who is going to reassemble the Scepter of the Shifting Sands to beat on the gong at the Scarab Dais and open the gates of Ahn'Qiraj. That is when the war will truly begin!

I was sent by Warchief Vol'jin himself to assist you in day to day operations. While you are in the field I can manage, train, and dispatch your troops on missions essential to our survival in this place.