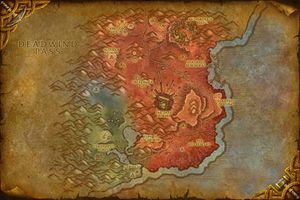 We have slowed the Iron Horde down, but this war is far from over... I'll stay here and continue our efforts to hold back the Iron Horde.

The Warchief needs to know about what we have accomplished here today, and the threat we face in the future.

It is probably best if you report to High Overlord Saurfang yourself, <class>.

This is more trouble than I first tink. Da Iron Horde be strong, but we are da true Horde, and we be stronger.

I fear this is da start of much bloodshed, before we go ta war, we be needin' a plan.

Don't forget the standing port to Orgrimmar at the Shattered Landing.

This was the last part of the quest chain until Warlords of Draenor was released, at which point

[91] The Dark Portal will open up from the "What's New?" message that appears after logging in the first time, or from the Warchief's Command Boards in capital cities.

On completion between Patch 6.0.2 launch and the release of Warlords of Draenor[1], players were awarded the feat of strength

[The Iron Invasion], awarding the title <name> of the Iron Vanguard, and the