For the instance, see Halls of Valor. 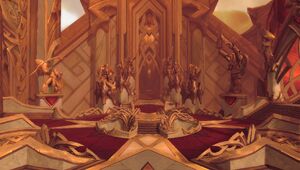 Skyhold is a portion of the Halls of Valor which are located high up in the clouds above Helheim. During the third invasion of the Burning Legion, Skyhold was set aside by Keeper Odyn as the warrior order hall, granting the warrior the title of the Battlelord and commander of the Valarjar forces in the fight against the Burning Legion.

Skyhold is entered via a central area, which leads to four sections - Eye of Odyn, Forge of Odyn, Arena of Glory and The Great Mead Hall. Finna Bjornsdottir, Ragnvald Drakeborn, Valarjar Aspirants and Valkyra Shieldmaidens are standing around the entrance to the Skyhold, while Val'kyr of Odyn can be seen flying above. 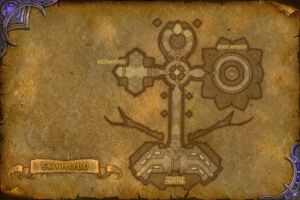 The Eye of Odyn area is where the class hall leader can recruit troops, send champions and troops on missions, place work order for champion armaments and equipment, purchase items from the quartermaster and travel to other zones in the Broken Isles.

Aerylia can be found at the entrance to the area, talking to her will give the player the options to travel to one of the Broken Isles zones. Quartermaster Durnolf and a replica of the Battlelord's Armor can be found on the near left side. Durnolf sells the armor set and armor upgrades. Haklang Ulfsson can be found on the near right, allowing the player to place work orders for champion armaments and equipment. Haklang Ulfsson will only be available if the player choose the 3rd tier Order Advancement option Heavenly Forge.

Skyseer Ghrent and the Eye of Odyn can be found at the far end. The player can send champions and troops on mission by interacting with the Eye of Odyn, while Ghrent will be handling most of the quest turn-ins.

The Forge of Odyn area is where the class hall leader can research their Artifact Weapon to gain more Artifact Knowledge, unlocking traits in their weapon by spending Artifact Power, changing weapon visuals and upgrading their class hall.

[Light's Heart] can be found at the north side of the entrance in front of the three stone tables: Saga of the Valarjar, The Favored of Odyn and The Legend of Odyn. Einar will offer upgrades to the class hall, while Fjornson will help research the weapons. On the opposite side, Keeper Thorim is standing in front five pedestals with the unlocked appearances of the artifact weapon appearing above each. At the far end, Master Smith Helgar and Dvalen Ironrune are located besides the Forge of Odyn. Interacting with the Forge of Odyn will allow the player to spend Artifact Power to unlock traits for their weapon and to change their weapon appearance.

The Arena of Glory area is where the class hall leader can place a work order to complete one non-elite World Quest, use the Training Dummys and to fight for a chance to win the

Once every 3 hours Odyn will place the Skyhold Chest of Riches in the center of the arena, warriors entering the arena will be flagged for PvP and must fight to win the chest. If the chest is not looted in 10 minutes, Hargal the Bladestormer will jump into the area and

[Bladestorm] until the chest is looted or he is defeated, which happens when he reaches ~10% health, at which point he will retreat and drop his axe, picking up the axe puts you into a permanent bladestorm, with a huge damage boost. A player will only be able to see and loot the chest if the they choose the 2nd tier Order Advancement option For Honor and Glory.

Matilda Skoptidottir can be found on the left side of the arena, offering use of Blessing of Mjolnir to gain the

[Horn of War] to unleash the power of the Val'kyr to help complete a non-elite World Quest once every 18 hours. Matilda Skoptidottir is only available if a player choose the 5th tier Order Advancement option Val'kyr Call.

Armor racks featuring warrior tier sets are located at the both the left and right sides of the entrance. Once a player collects all items from a set, the set will appear on the armor rack.

The Great Mead Hall is full of Valarjar Aspirants and Shieldmaidens eating and drinking while Stormforged Valarjar guard the hall. At the hall's center sits Keeper Odyn, with Hymdall and Lord Darius Crowley (for Alliance players) or Eitrigg (for Horde players) at his right and left sides, respectively. Hruthnir and Magnar Icebreaker can be found on the far left side, while Renfield and Svergan Stormcloak can be found on the far right side. The Grand Challenger's Bounty can be located at the entrance to the hall.

Once a player has progressed through a zone, a Val'kyr of Odyn will enable the player to use Jump to Skyhold to enter Skyhold, talking to Aerylia, the player can return to any of the zones.

Using this means of travel will lead the player to these places:

Einar the Runecaster handles the Warrior's Order Hall advancement upgrades. There are 8 tiers with each tier having two available upgrades to choose from, except two tiers which only have one upgrade. Each upgrade will require

Odyn supplies the Battlelord with weapons of great power, each fitting a different specialization. The quest to obtain the first weapon is available at level 98 and the warrior must decide which weapon to choose, however this limitation is short as the other two other weapon quests are available at level 102, enabling the warrior to have all 3 weapons. Each weapon initially came with four unlockable appearances and one hidden appearance. Each appearance has 4 color tints which can be unlocked by achieving a certain requirement. A new appearance was made available with patch 7.2, requiring the player to complete a difficult solo challenge to unlock it. In addition, each weapon has a hidden trait unique to that weapon.

In order to attempt the challenge, your character must be level 100, have 35 Artifact Traits and complete the new Empowered Trait questline. This must be done for each weapon in order to unlock its challenge. In addition, your region must have constructed the Mage Tower in Deliverance Point, Broken Shore. Speak to War Councilor Victoria once the Mage Tower is constructed to attempt the challenge. The first attempt is free, with subsequent attempts costing 100

This greatsword was borne into combat by the barbarian warlord who first united humanity under a single banner, founding the nation of Arathor. A master tactician and strategist, King Thoradin went on to play a critical role in ending the Troll Wars. Later the sword was lost while it was being used to subdue a C'Thraxxi monstrosity in a forgotten tomb beneath Tirisfal. Abandoned and all but forgotten, Strom'kar has been slowly drinking from the shadowy power there over thousands of years.[1]

[Surrounded by Trolls!] - When Strom'kar is equipped, all nearby hostile NPC trolls become feared for 2 minutes.

[98 - 110] Secrets of the Axes handed by Master Smith Helgar. The quest has a daily chance of being available for the day for each region, and is available to everyone in that region. If the quest is available, a dialog option will appear, saying "Is there an axe equal to Strom'kar?". Follow that line of dialog to unlock the quest.

[110] Closing the Eye, requires you to defeat Archmage Xylem in the Eye of Eternity.

In ages past, the titanic watcher Keeper Odyn betrayed the sorceress Helya, killing her and twisted her spirit into a spectral Val'kyr. He forged this pair of swords for the mightiest of his storm-forged Valarjar, but Helya stole the swords and infused them with a portion of her rage. She then gave them to her own champion, who used them to hunt the greatest of heroes and drag their souls away to serve in Helheim. These swords stir their owner into unrelenting and punishing attacks that overcome a target's defenses and leave no opening for counterattacks.[1]

[Gaze of the Val'kyr] - When the Warswords of the Valarjar are equipped, Gaze of the Val'kyr will sometimes trigger when a mob/NPC strikes a killing blow against you, preventing your demise for 8 seconds. If you defeat the enemy that killed you in those 8 seconds, you will stay alive and gain 50% of your health back, if you don't, you will die.

[The Dragonslayers], which is created by combining three items which require Exalted reputation with the Valarjar to obtain:

[110] An Impossible Foe, requires you to defeat Agatha in the Fiendish Vault in Azsuna.

An impenetrable shield crafted from a scale of the black Dragon Aspect, Neltharion the Earth-Warder, before the Old Gods' corruption overcame him. The formidable vrykul king Magnar Icebreaker carried this shield into combat and won victory after victory in the face of grim odds. When he finally fell in battle, it was due to treachery by servants of the Val'kyr Helya. The shield is now entombed with King Magnar's body in the Path of Kings in Stormheim.[1]

[Burning Plate of the Worldbreaker], which can occasionally be found on a pile of treasure in Neltharion's Vault in Highmountain, Broken Isles. The player's Artifact Knowledge must be at least Level 5 in order to see this item.

[110] The Highlord's Return, requires you to defeat Highlord Kruul in the Twisting Nether.

In the alpha, spirits of famous warriors were in Skyhold, but they were removed because it didn't feel appropriate to Blizzard for these human and orc heroes to appear in this vrykul place.[2] The identity of these removed heroes is still unknown. However, checking the NPC IDs on Wowhead, starting with the version of Danath Trollbane used during the

[98 - 110] Return to the Broken Shore warrior class quest ([1]) and increasing incrementally, the IDs lead to several consecutive unused warrior NPCs that were possibly meant to appear in Skyhold.

Considering some of these are still living to this day, it is possible that other living warriors were meant to be accepted into Skyhold like the Battlelord. The presence of Nazgrim and Thoras Trollbane may also indicate that they were not maybe always meant to be part of the reborn Horsemen. Several of them have a placeholder model, though others such as Anduin Lothar had never appeared in World of Warcraft before.

Cairne Bloodhoof might have been originally intended intended to be a Valarjar's sub-leader, according to

[New Recruit], which had similar variants given by the other class halls' sub-leaders.