This article lists the races that are able to become warriors, and the lore and speculation regarding each. Technically speaking, any race can become a warrior, it only takes effort and practice with melee weaponly after all. 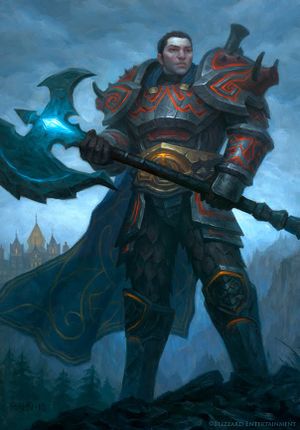 Warriors are common among humans.[1] The art of battle has been practiced and refined since the time of barbarian warlords and human tribes. The most popular place for a human to be is in melee combat with a sword or mace in his or her hand.[2] Footmen are warriors who serve as basic infantry in armies of the human nations. Comprising the bulk of the Alliance army, the footman is the heart of the war machine for elves, humans and dwarves. Fighting in close formation, they use proven tactical methods: Advance slowly with shields raised, then draw swords and close to melee range. The grim, mud-slogging soldier initially appears to be a grizzled veteran, until you get a glimpse of his young face. His weapons and armor look worn, like they were scavenged from a battlefield. Footmen like to travel in small groups and form ranks. They are attuned to formation fighting, and coordinate their attacks. They're capable of bringing down well-armored opponents.[3]Aside from champions, the knight is the elite warrior of humanity, the best of the normal troops. They typically form ranks and charge to devastating effect on the battlefield.[4] Even the lowly peasant, the most humblest of origins for humans, can learn to to use both pick and axe for their own defense if threatened. Ever since the Second War, human peasants and farmers were roused by tales of the orcish atrocities in Stormwind during the First War to train themselves as rag-tag militias should their towns be attacked. 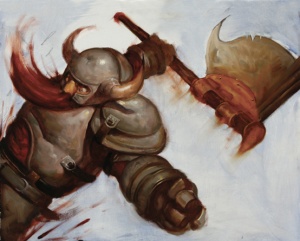 Ironforge dwarves in particular have a long tradition of combat training, and many dwarves train extensively with axe and hammer.[1] Mountain kings are the elite of the Ironforge warriors, imposing fighters who tap into mystic powers to become true champions of their race.[5] Another famous dwarven warrior is the Dwarf Sharpshooter.[6] 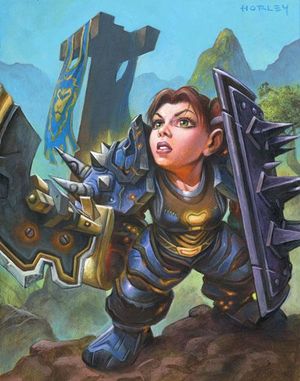 Every time someone makes a comment about how no gnome warriors exist, he runs the risk of being hamstrung the next time he is in a tense situation. These gnomes are the kind who deny that they are small, every other race is just too big. The gnomes that become warriors are fierce, but are often placed in defensive positions, guarding either artillery or battle magi.[2] Being small is an advantage, making warrior gnomes difficult targets in the midst of melee.[7] 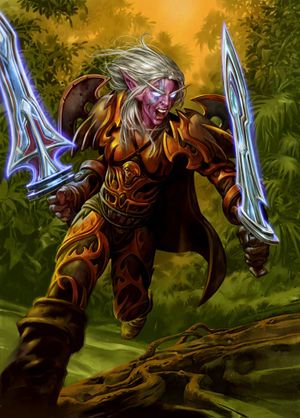 Extremely agile, night elf warriors combine their speed with good tactical knowledge and deadly fighting style. The most well known warriors of night elf society are the Sentinels, who fight with moonglaives as melee or thrown projectile weapons. The night elf wardens typically fight with the

[Umbra Crescent] and have hidden knives they throw as projectiles. 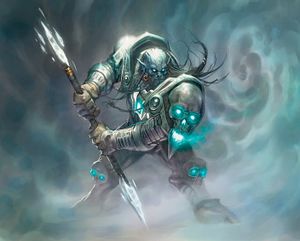 There are no famous draenei warriors as very little is known of their lore, though there have probably been many a draenei warrior-hero in the past. It could be possible that younger draenei have a lesser feeling of responsibility to worship and show gratitude to the Naaru, at least not in learning the arts of the paladin, but possibly still in thoughts and personal religious actions outside of battle. Draenei warriors could also be individuals who want to achieve fame and glory only through physical skill and training, instead of relying on magic or the favor of the Naaru. 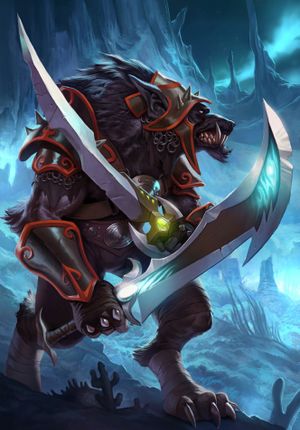 Worgen warriors are likely common as the kingdom of Gilneas had many footmen and knights. Unlike the half naked wild worgen who fight like animals with teeth and claws, the Gilnean worgen fight like men, wearing plate and mail and armed with steel swords and polearms. 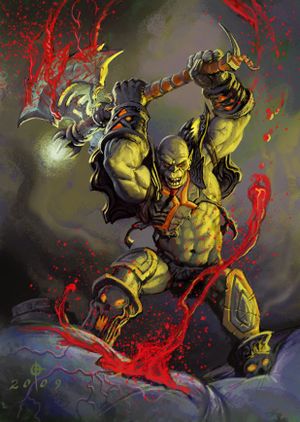 Boarguts the Impaler, an orc warrior.

Warriors are common among orcs.[1] Orcs have a long history of warfare; their race has been battling various creatures for generations. In the past, many orcs embraced their demon-born bloodlust and became barbarians. In recent years, the orcs' discovery of their spiritual and shamanistic path traditions has allowed orcs to focus and refine their savagery. Many orcs still become barbarians, but the way of the trained warrior - becomes more and more common. The iconic orc warrior is garbed in chain mail or leather and plate. He carries a mighty battleaxe and wears a horned helmet. He crouches in a battle stance, axe at the ready, as he evaluates his opponent...then, with a fearsome yowl, he strikes in a blur.[8] Such warriors can be found among the common Grunt or the venerated worg riding raiders.

A warrior clapping someone's wrist is a sign of their approval.[9] 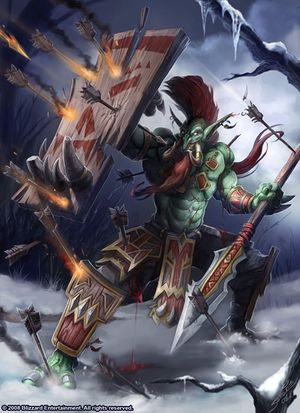 Nok'tal the Savage, a troll warrior.

Savage berserkers, troll warriors rarely think about self defense. They prefer to make an enemy think about it, unleashing their primal fury on their foes. Though there are not many pure warriors among trolls, they usually combine it with their hunting and throwing skills or some dark voodoo rituals. Berserker Zanga, the warrior trainer would seem to indicate troll warriors are representing berserkers. The addition of

[Heroic Throw] would also support this. 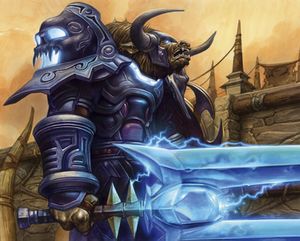 Koringar the Heavy, a tauren warrior.

Tauren warriors are calm and self-sufficient, not given to boredom and despair like many low-ranking soldiers. In large skirmishes, tauren warriors serve as shock troopers and front-line fighters; in small warbands, they might serve as leaders or scouts as well. A tauren warrior's muscles ripple under his brown hide. His compact frame hints at tenacity and endurance, while his scarred armor tells of many past battles. Tauren warriors form the backbone of tauren military forces. These versatile warriors excel in melee combat, plus they can track, scout, and forage for food. A tauren warrior is wise enough not to lose his head in the heat of battle. He flanks with his allies, positions himself to make the best use of his Cleave feat, and obeys his superior's orders. A tauren warrior uses Power Attack to its fullest effect at the start of combat, but stops if he misses twice in a row.[10] Even with the lowest totem-bearing warrior, tauren exemplify the Horde's strength...Tauren are strong-willed and cunning.[11] 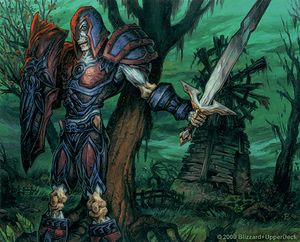 Warriors are common among Forsaken. Forsaken warriors in their previous life could be brave knights as well as cruel bandits, so their style can be very different.[1]

Most Forsaken warrior NPCs are known as Death Guards. 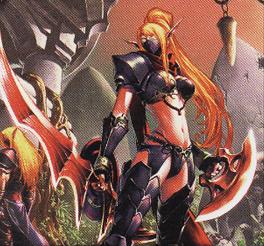 Some blood elves become warriors (or scouts or hunters) — especially those seeking to be spell breakers, demon hunters, and rangers. In the aftermath of the Third War, Kael'thas took a group of the strongest blood elf warriors and spellcasters and joined the Alliance against the Scourge (most of these later joined him in Outland).[12] Although non-playable blood elf warriors do exist, most are in service of Illidan (or at least Kael'thas). There is also a group of blood elf and draenei warriors who form part of the Shattered Sun Offensive, the Shattered Sun Warriors.

The return of war veterans from Outland and Northrend probably led to blood elf Warriors becoming a playable race/class combination in Cataclysm, as they started training new recruits. 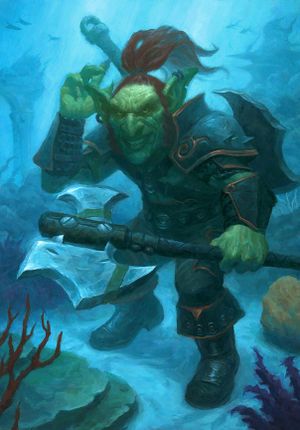 Fraznak the Furious, a goblin warrior.

Though goblins often rely on ogres and hobgoblins for muscle, it is not uncommon for goblins to practice the ways of the warrior. Many goblin warriors are known as bruisers and enforce the rules of goblin towns such as Booty Bay and Gadgetzan. Despite their small size goblin bruisers are very strong, employing the use of nets and high powered rifles.

It was also said by Broxigar in The War of the Ancients that goblins are much stronger than their size would indicate.

Gnolls are common brutes and raiders, though not many are memorable.

Due to their brutish nature most ogres are warriors.

Quilboar males grow taller, heavier, and stronger than females. For this reason, only males take up the path of warrior. Females feel no resentment over this fact, and, indeed, the males do not see themselves as superior. Female quilboar possess such strong tribal instincts that most do not even desire to follow the males' path. On occasion, a female child displays such unnatural strength that the shaman deems her a man. She then trains as a warrior and lives in all ways like a male, even taking female mates. Tribal legend holds that such unions have occasionally produced an exceptional quilboar warrior (though no scholar has confirmed the tale), so there is little or no stigma attached to such situations.[13]

Quilboar warriors fight with a single-minded ferocity. Given a strong leader or an ancestral enemy, they will fight to the death, sacrificing themselves to destroy even one opponent. Quilboar warriors favor the flail, but they will make use of any weapon, even an impromptu weapon, that presents itself.[14]

The warrior was the first class to be available to every race. However the Burning Crusade added blood elves who did not have warrior as an option (though they did in early beta). With Cataclysm introducing blood elves warriors, the class was once again available to all races. The original limitation was due to a cap Blizzard set on the number of classes avalibe to each race. Once they added more combinations of old classes and races in Cataclysm, this limit was lifted and blood elves acquired warriors.

Blood elf warriors are a standard class for blood elves in the RPG. Some blood elves become warriors (or scouts or hunters) — especially those seeking to be spell breakers, demon hunters, and rangers.[15] In addition, there were High Elf Swordsmen in the Undead campaign in Warcraft III: Reign of Chaos and Blood Elf Warriors existed in the Burning Crusade's early beta, so blood elven warriors have technically always been justified.