Warsong Gulch (WSG for short) is a battleground nestled in between the southern part of Ashenvale forest and the northern area of the Barrens. It is located near the area where Grom Hellscream and his orcs chopped away huge swaths of forest during the events of the Third War. Despite disagreements from Thrall and the shamans, some orcs have remained in the vicinity, continuing their deforestation to fuel the Horde's expansion. They call themselves the Warsong Outriders.

The night elves, who have begun a massive push to retake the forests of Ashenvale, are now focusing their attention on ridding their land of the Outriders once and for all. And so, the Silverwing Sentinels have answered the call and sworn that they will not rest until every last Orc is defeated and cast out of Warsong Gulch.

Warsong Gulch is a 10v10 capture the flag battleground. Each side tries to take the opponent flag and "cap" (score) it at their own base. You can only "cap" the flag if the enemy isn't carrying yours. The winner is the first team to achieve 3 caps, or the team with the most caps when the allotted time expires.

The gleaming purple-and-emerald forests of Ashenvale are more than just pleasant woodland. To the Warsong orcs who name themselves Outriders, they’re a prize cache of building planks; to the night-elven Silverwing Sentinels, they’re home. Where the turned soil and tree stumps surrounding Horde lumber mills start to encroach on Ashenvale’s timberlands, these two factions clash.

Each group recruits heroes from far and wide – the Horde to batter back the defenders and clear the forests, and the Alliance to shatter the aggressors and stop the disappearance of their precious land. Capturing flags might seem like an unorthodox method of settling this dispute, but it’s symbolic (and hardly without bloodshed). Whoever holds their defeated foes’ banner will show all who look upon the forest that their claim is the strongest – and dictate the future of one of the most important, ancestral lands of the Kaldorei.[1]

A valley bordering Ashenvale Forest and the Barrens, Warsong Gulch hosts a constant battle between the Horde and Alliance. As a 10 vs 10 capture-the-flag battleground, the first faction to capture three flags is victorious. Eager to aid their allies, members of every race in Azeroth rush to the Gulch to lend sword, or spell, to the conflict. 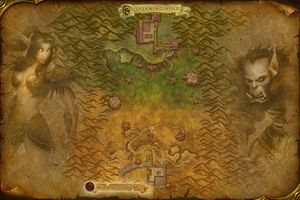 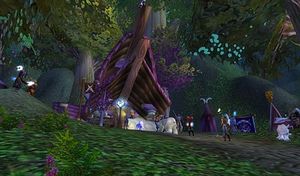 The Alliance entrance to Warsong Gulch.

As with all battlegrounds, players of sufficient level (in this case level 10) can queue for Warsong Gulch through the PvP interface, found on the micro menu. Players can also queue by speaking to battlemasters in capital cities.

Warsong Gulch also has its own heavily guarded entrances in the game world, one for each faction. Originally, these served as one of the only ways to join the battleground. However, with the advent of the PvP interface in 3.0.2, these now serve mostly a decorative purpose.

The Horde entrance is on the mountainside to the west of Mor'shan Base Camp at the northern end of the Northern Barrens. 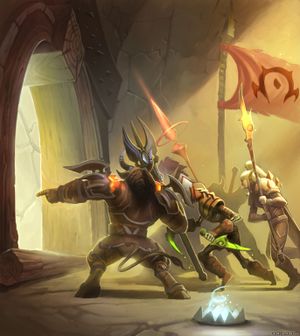 The Horde charge into battle. 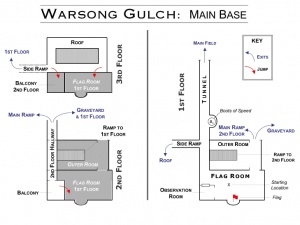 Tactical map of the bases.

Warsong Gulch is a 10v10 Capture the Flag battleground, with a duration of 20 minutes. The object of the game is to capture the enemy team's flag, while defending your own against capture.

The game ends when one team has scored 3 captures, or after 20 minutes. After that time, the team with the most flag captures wins. If this would result in a tie, the team that captured the last flag wins. If neither side has captured a flag, then the game ends in a tie.

Each team has one flag in their flag room. Players see the enemy's flag as a clickable object. Clicking on it causes the player to pick it up. To score a capture, the capturing team must have their own flag at its base and bring the enemy's flag to that same spot. If both flags are being carried, neither team can complete a capture. After a capture, both flags will reset to their original locations after 20 seconds.

Certain actions will cause the flag carrier to drop the flag. These include that player being killed, summoning a mount, entering

[Blessing of Protection] ("bubble"), and

[Ice Block]. The carrier can also drop the flag by clicking on their own flag buff (received while holding the flag). Actions that do not cause the flag to drop include shapeshifting (cat, travel, ghost wolf),

When the flag is dropped, it becomes a clickable object where it was dropped. A capturing team member can pick it up again and keep running, but the player who dropped it will not be able to personally pick it up again for 3 seconds. Or, a defending team member can click on it and it will instantly teleport back to their base (this is called "returning" the flag). If no player picks up or returns the flag for about five seconds, it will return itself.

There are at least four different strategies commonly used in Warsong Gulch; Split into O and D, Mid Control, All Escort the FC, and Zerging. The final is most common in PUGS and least likely to produce a victory while any of the first three can be made to work depending on the composition of the given team.

The key to victory is communication with the other players in your faction. Take the time before the game starts to agree on what strat you will be using but be prepared to change if you need to as events develop. By communicating, your teammates will have the edge and be able to anticipate your enemies' position and movements. It is useful to know, for example, if the opposing faction has characters camped at your graveyard. When allocating parties within a raid group, attention should be focused on not only the classes and abilities of the players involved but also their levels. For example, it is foolish to send in some level 25 characters when you know that the enemy flag is guarded by multiple level 29s. It is important to keep in mind abilities that can root or snare a player, as well as speed enhancements, and the ability to successfully get away from a group. As in any PvP situation, the key ability to develop with your character is the ability to adapt.

You are much more powerful in Battlegrounds when you are at the higher levels of your bracket. If you're playing in a 25–29 Battleground you will be more effective in direct combat as a level 29 than a level 25-28 because you will be much stronger, have more powerful spells, and stronger, higher leveled weapons with more DPS. You will also notice the other faction attacks you depending on your level because a level 29 will know a player two or more levels below them is an easy fast kill and takes only a few hits.

Remember, Totems are a lifesaver! When you are on your way to capturing the flag, lay a couple of totems, this will make a powerful escape route for you and your allies.

Team Buffs are essential for flag capturing! Aspect of the Pack can speed up your team as they protect the flag, also Blood Pact is great for EVERY ally. Defending, Healing or Attacking.

Hunters, lay a Freezing Trap just on the flag. If an enemy captures it, they'll be "sticking around" for a while. Also, lay another damaging trap above to add insult to injury.

NEVER LEAVE THE FLAG CARRIER ALONE. Have at least one person with him/her at all times.

Communicate effectively and efficiently. Don't spam the battleground chat with things not necessary to PvP.

There are three types of power-ups found in Warsong Gulch. To use them, simply walk up to one. They will respawn after a short period of time. 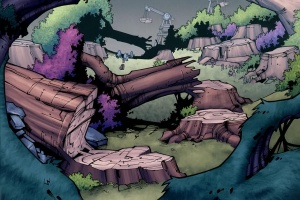 Warsong Gulch in the comic series 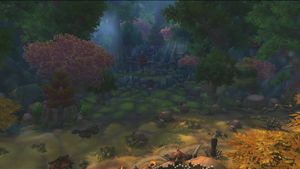 The game awards bonus honor to everyone on your side of the match for reaching certain goals. Those goals are:

Other scored events do not grant bonus honor. These include: killing blows, picking up the opponent's flag, and returning your flag to your base. Honor is awarded for honorable kills as normal. Losing a complete match (0 captures and a loss) also gives you no bonus honor.

While it is possible to lose a match and still accumulate honor from honorable kills, a careless attitude about losing is generally frowned on, and considering that a winning match grants a substantial honor bonus, winning matches allows for accumulating honor points much more rapidly.

During the Warsong Gulch Call to Arms, completing the battleground will earn players bonus Honor and

The winning team receives an 18 Honor Point bonus for each capture the opposing team is prevented from completing. This means every capture below 3, up to a maximum of 54 bonus Honor if the losing team had 0 captures.

Warsong Gulch items are available by spending honor accumulated with Illiyana Moonblaze (Alliance) or Kelm Hargunth (Horde). Though some of the Sentinel and Outrider factions items have different names and artwork, their bonuses and equip effects are identical. More powerful versions of some items can be purchased as you gain levels, allowing higher level players to receive faction rewards with better equipment bonuses. However, the epic quality bracer rewards are only available from level 40, and the epic quality leggings are only available at level 60.

During the course of playing, you may hear the following frequently used acronyms and terms used by players to give out directions: