Warsong Hold is the headquarters of the Horde forces in Northrend. It was constructed and is owned by the Warsong Offensive, led by Garrosh Hellscream — formerly chieftain of the Mag'har in Outland. This massive fortress is located in southern Borean Tundra, just a short distance from the coastline.

After landing in the Borean Tundra, the Warsong Offensive required a base of operations, a location to house its troops and leaders, as well as a place for formulating strategies to further the Offensive's hold in Northrend. An army of peons were sent from Orgrimmar to build this large keep. They began digging into the cold stone surface of the tundra and carved out massive blocks of stone. With the aid of cranes, they began positioning the blocks atop the hill they dug around. After a short time, the fortress itself was completed. Once the Hold was completed, the peons began work on an outer line of defenses; a series of towers and gates around the outer edge of the Mightstone Quarry. Along the road from Garrosh's Landing to Warsong Hold, a village including Torp's Farm sprang up to house the peons working on the fortress.

All however has not gone according to plan for Garrosh Hellscream and Varok Saurfang and their keep.

The peon village has since been taken over by the Cult of the Damned. They ravaged the village and began creating more undead minions for the Scourge forces. Since, the peons have moved to Warsong Hold and are currently being housed in small shelters around the base of the keep.

Also, the peons working in Mightstone Quarry dug too deep and uncovered old tunnels. From the tunnels, hordes of Nerub'ar forces poured forth and began attacking the soldiers of the Warsong Offensive. Several soldiers have now become trapped in webs and adventurers are tasked with freeing them.

Alliance Deserters are currently maintained in the pigsty of the hold. 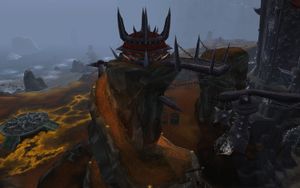 Being one of the first places that Horde adventurers can come, Warsong Hold is an important travel hub.

To get to the flight master, adventurers must take an elevator from the second floor (where most of the profession trainers are located) to the top of the fortress.

The Zeppelin lands at a small raised platform inside of the fortress itself. 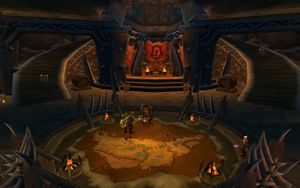 Adventurers seeking training for Leatherworking and Skinning at the Grand Master level must travel to Taunka'le Village to the north east and speak to Awan Iceborn and Tiponi Stormwhisper respectively.