Led by Garrosh Hellscream, the son of Grom Hellscream, the Warsong Offensive is the main army of the Horde in Northrend. Garrosh Hellscream is accompanied by Varok Saurfang. These allied forces are also represented in the battlegrounds located on the Strand of the Ancients and Isle of Conquest, where they wage war against the Valiance Expedition. They have set up their base in the Borean Tundra. Together with the other expeditionary Horde forces in Northrend, they form the Horde Expedition.

Warsong Hold was created on a nerubian site. Led by Garrosh Hellscream, they defended the Hold and fought the Scourge in the tundra. The fortress is used as the headquarters for the Offensive, and from here Garrosh led all Horde actions in Northrend.

They fought the Valiance Expedition for the titan database in the Strand of the Ancients. 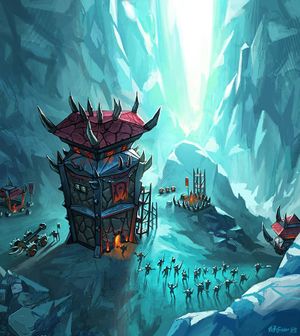 Overlord Agmar led the Hordes force in the region from Agmar's Hammer. The Offensive fights the Scourge's nerubians. They accept the Taunka into the Horde. They attempt to create the dialog with the dragons but the past actions of the Dragonmaw clan make it difficult. Without problem, they made contact with the local tuskarr.

From Conquest Hold, the Horde must fight the vrykul, Wolf Cult and the Venture Company. However, Conqueror Krenna is a tyrannical chief and her sister decides to kill her to take her place as Conqueror.

Overlord Agmar led a vast army to claim the island for its resources.

When the Alliance led by Bolvar Fordragon attacked the main entrance of Icecrown, the Horde's forces led by Dranosh Saurfang came to assist them. The Lich King took the life of Dranosh, and the betrayal Grand Apothecary Putress put an end to the offensive, killing most of the attackers. Bolvar was presumed deceased.

From Orgrim's Hammer, the Horde under the order of Korm Blackscar tried to take Ymirheim, a vrykul village, and to eradicate the Scourge troops in the valley despite discord with the Alliance.

During the fights in the Northrend, a lot of warriors of the Horde had been imprisoned as slaves into the Pit of Saron. The Warsong forces succeed in saving Sylvanas Windrunner and her troops when she escapes from the Halls of Reflection.

They fight in Icecrown Citadel against the Scourge and the Alliance on the Rampart of Skulls. They help the Horde adventurers in Light's Hammer. When Varok Saurfang hears the scream of Bolvar Fordragon, he led the Warsong forces on the Orgrim's Hammer to attempt to save him. However, they fall upon the Skybreaker in the sky.

Following the ascension of Garrosh Hellscream to the rank of Warchief, the Warsong Offensive is now led by Varok Saurfang.

The Mor'shan Rampart is held by troops affiliated to the Warsong Offensive.

Reputation with Warsong Offensive can be earned by completing the following daily PvP quests in Grizzly Hills.

Reputation with Warsong Offensive can be earned by completing the following daily quests in Icecrown.