For the clan from the main universe, see Warsong clan.

The Warsong clan is a clan led by Garrosh Hellscream himself, a role given to him when Grommash Hellscream became Warchief of the Iron Horde, and makes their home in the lush land of Nagrand. The mounted raiders of the Warsong favor speed and maneuverability in battle—they move quickly, strike swiftly, and are away before their enemies know what hit them. Their war cries inspire their allies and strike fear into all those who dare get in their way.

At some point, the clan was enslaved by the Gorian Empire. Their freedom was celebrated by constructing drums of talbuk leather stretched tightly over ogre skulls.[2]


The Mountain of Oshu'gun is sacred among all orc clans but the Warsong have claimed it as their own.[3] Shaman around the sacred mountain tap into the Void to force the elements to their will, but this has a side-effect the Warsong could not have foreseen: within the Twisting Nether, voidwalkers led by Invalidus prepare to attack Draenor.

The Warsong invaded Telaar and killed native draenei as well as some shadow hunter trolls.[4] The Telaar group is led by Packleader Kargora. Their goal was to take the impenetrable shield of the city and move it to Grommashar; however, the crystal was destroyed.[5]

After Grommash's rescue, the clan resolves to rebuild Draenor with the draenei.

The Warsong continued following Grommash and were joined by the other clans, forming the Mag'har orc clans under the leadership of Warchief Grommash Hellscream.[6] As the Mag'har and Lightbound clashed, events on Azeroth would see to a new war between the Horde and the Alliance. In the midst of this, Eitrigg sought to travel to the alternate Draenor and call upon the debt the Mag'har owed to the Horde for liberating them from Garrosh Hellscream's meddling and the Burning Legion's corruption.[7]

As the entire Lightbound army was marching towards the Mag'har, Grommash ordered for the Mag'har to follow Geya'rah and fallback to Azeroth. Thus when Warchief Hellscream and Lantresor of the Blade charged at the Lightbound, Eitrigg activated the shard of the

[Vision of Time] in his possession in order to return to Azeroth with his new allies.[8] After their arrival on Azeroth, Overlord Geya'rah took her place as leader of the Mag'har and pledged the loyalty of her people to Warchief Sylvanas Windrunner and the Horde.[9] 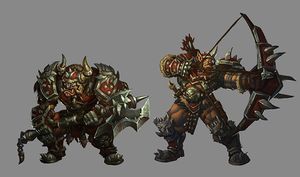 A Warsong warrior and archer.