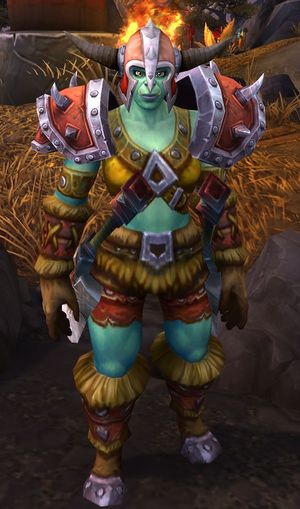 A Warspear Grunt with an horned helmet

Warspear Grunts are level 100 elite Horde guards found in Warspear of Ashran. Some of them are finally wearing their trademark helmets. Non-elite versions can be found patrolling the Road of Glory.

Two Warspear Grunts can be found talking next to the flightmaster at the northernmost tip of Warspear. The female Grunt appears to be sharing pieces of information with her less well-informed comrade in arms.

Warspear Grunt 2 says: Oh yeah? Why do you think that is?
Warspear Grunt 1 says: The grunts that return from there are reporting sightings of strange spirits. They say that necromancers are enslaving the ghosts of the ancient ogres.
Warspear Grunt 2 says: Ghost ogres? I can see why they'd stay away. Not that I'm afraid or anything, but I prefer enemies I can actually strike with an axe.

Another Grunt can be found in conversation with Gordon Ray, near the arakkoan

Warspear Grunt says: All I know is da Alliance wants em, and da elves think they big and powerful. We don't want da Alliance havin that.
Gordon Ray says: Powerful, you say? Maybe I should go get my hands on some of them.

Warspear Grunt says: You talkin' bout da one who kept screamin' after you chopped off his foot?
Gordon Ray says: Yeah! I mean come on, it's only a foot! Those things are so easy to stitch back on.
Warspear Grunt says: Uh, I don't think it works that way...