Warspear Outpost is the Horde base in Ashran.

Found to the north of the main island, Warspear Outpost acts as the base of Horde operations within the PvP zone, featuring a graveyard, vendors and the zone's Horde Generals. It serves as a rally point for Horde players to turn in Artifact Fragments, seek repairs and purchase battlefield upgrades and new gear. Heavily-defended, it is nevertheless under constant threat from the Alliance, who seek to invade from the south. To the north of Warspear Outpost lies Warspear itself, the Horde's capital on Draenor.

The Alliance equivalent is Stormshield Outpost, found at the south of Ashran.

Warspear Outpost is separated from the main island of Ashran by a small bridge. The base's only channel for invasion and expansion, the bridge is often the site of heated battle. Across from the bridge lies the first Horde capture point in Ashran, populated by Warspear Blood Guards and Warspear Grunts.

Descending north from Warspear Outpost leads to Warspear itself. 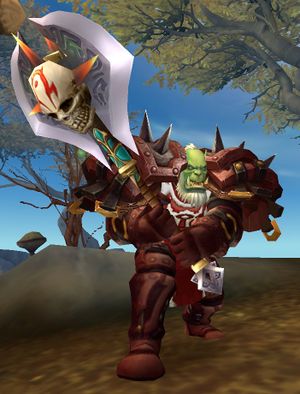 A Warspear Gladiator, standing ready to challenge any attackers 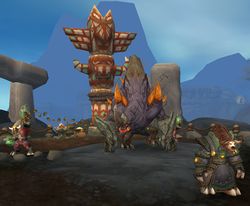 Atomik and the druids, channeling energy into the Underpowered Earth Fury

During the expansion's beta, Warspear Outpost was originally called Warspear, with the faction city simply termed the "Horde Staging Area".