The Wastewander (or Wastewanders[2] and Wastewander Bandits)[3] are a group of humans who inhabit the deserts of Tanaris and Uldum. They are currently led by Arik Scorpidsting, and were formerly led by Caliph Scorpidsting when they were a gang of bandits.

As their name implies, the group was formerly nomadic; wandering around Tanaris and later Uldum. This shifted by the time of the Assault in Uldum, where the Wastewanders were shown to have established several settlements in abandoned tol'vir ruins and encampments left behind by Schnottz's crew; complete with trade caravans and a port.

The Wastewander Bandits descend from a small band of human pirates who arrived in Kalimdor around year 20, shortly after its discovery by the people of the Eastern Kingdoms. When the Southsea Pirates arrived at Tanaris, they got into competition with the Wastewander, fighting them and stealing the few ships their enemies had, resulting in the Southsea pirates marooning the Wastewander in Tanaris.[2] 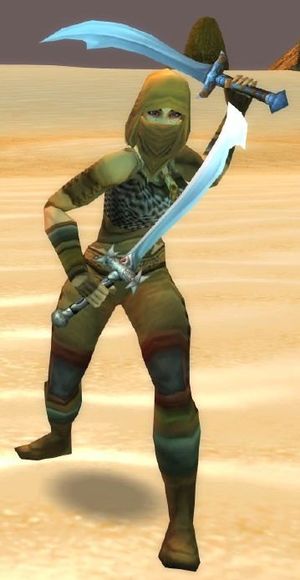 Since their defeat against the Southsea Pirates, the Wastewander took to a new life as outlaws and started raiding rich goblin settlements and capturing their life-giving water wells. They have taken control over many of the water sources in the desert and were thus despised by the Gadgetzan Water Company. They could be found at the Noonshade Ruins and the Waterspring Field. They were led by Caliph Scorpidsting whose head was sought by Gadgetzan.[4]

After the Cataclysm, all of them, along with their leader, moved into the Eastmoon Ruins after the Noonshade Ruins were flooded. Numerous members of the organization were also spotted in the recently uncovered region of Uldum, having gained access when the region's shield was damaged and failed. This group is led by Warlord Ihsenn and are eager to pilfer the treasures of the titans.[2] They can be found at the Sahket Wastes and the Ruins of Ahmtul, and have raided the Seal of the Sun King. Some became Schnottz's Landing Laborers, as evidenced by the Slacking Laborers.

During the Legion Invasions, the Wastewander fought against the demons at the Eastmoon Ruins.

The western half of Uldum has been taken over by the Wasterwanders; making their base of operations at the Obelisk of the Moon. They have taken over Schnottz's Landing, renaming it Ankhaten Harbor, the Obelisk of the Sun, Orsis, the Temple of Uldum, the Ruins of Ammon and the Oasis of Vir'sar. They appear to have abandoned their posts at the Ruins of Ahmtul. They are now led by Arik Scorpidsting, of unknown relation to their former leader, whose vessel, the Scorpidsting's Schooner, can be found at the Ankhaten Harbor. Captain Navid Sandstone also helps lead the defense of the Obelisk of the Moon when it is under siege by the Old God's forces.

During the Assault in Uldum, the Wastewanders traveled to Ramkahen to speak with King Phaoris. Despite protestation from High Commander Kamses, the King allows their presence at the war meeting. They swear to the pact of the Uldum Accord, joining forces with Ramkahen and the Explorer's League to see the region defended against N'Zoth and the Amathet. They claim that Uldum is their home now as well and will fight to defend it.[5] After this, Wastewanders can be found at Ramkahen.

When spoken to, Arik will claim the Wastewanders are a changed people.[6] By the time of the Assault, the Wastewanders have been overrun in several locations. With the exception of the Obelisk of the Moon, the Oasis of Vir'sar and the Ruins of Ammon; the various Wastewander settlements have been taken over by the aqir. In Orsis, a small hold out group remains, though they are all injured save for a lone Wastewander Mender; Outrider Lashan is a part of this group. In particular, the Wastewanders at Ankhaten Harbor have been turned into living hosts for the swarm, with the flight master, Dartan Oilpan, killed with aqir spores growing from his corpse. Wastewanders can also be found attempting to retake the Temple of Uldum at the Maker's Ascent. There, they are accompanied by an Explorer's League entourage of Reno Jackson, Sir Finley Mrrgglton, H'partho Ardoros, Elise Starseeker, Brann Bronzebeard, and Harrison Jones.

The Wastewander nomads are enemies of the Gadgetzan Water Company for three reasons:[1]

Killing Caliph Scorpidsting gives 15 reputation with Gadgetzan if doing so grants experience. All Wastewander NPCs in Tanaris have (or had) a chance of dropping a

[Wastewander Water Pouch]. These are once used to be turned in to Spigot Operator Luglunket in stacks of 5 for Gadgetzan reputation and a

The Wastewander Bandits are a band of outlaws who wander Tanaris. They are led by Caliph Scorpidsting.[7]

There are no easily attainable sources of water anywhere in Tanaris and so the Gadgetzan Waterworks Company build wells across the desert to farm fresh water. Mostly everyone leaves the wells alone, except for the annoying Wastewander Bandits who steal the water for their own use. You have to watch out for them as they will kill you on sight, steal your water, and then — if the rumors are true — they will "distill" your body, draining all the liquid out for their own use.[8]

Before being captured, Enslaved Bandits were likely Wastewander.