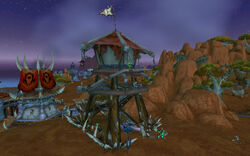 Watch towers (also spelled watchtowers) are insubstantial but highly useful lookout posts mostly used by the Horde. The role of defending orcish settlements is shared between them and the bunker-styled burrow.

Rising high above the treeline, watch towers resembled primitive huts laced with animal bones and giant tusks of every kind. These insubstantial - but highly useful - lookout posts were ideal for spotting the cowardly and deceitful human forces from above, making them a desired part of any orcish settlement's defenses. These emplacements could be upgraded to loose deadly projectiles upon any approaching enemies, or to rain explosive death down upon their foes on land and sea...[1]

Watch towers can be used to guard embattled orcish settlements, and provide static defense against land and air attacks.[2]

Unlike during the events of the Second War, the orcish watch tower started already armed and couldn't be upgraded to a guard tower or a cannon tower. Also, the Centaur Marauders had access to their own watch towers.[3]

Special Orgrimmar Watch Towers were built during the Invasion of Durotar. 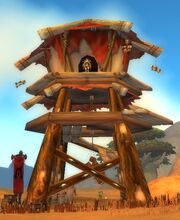 A watch tower in the Barrens.

Orcish watch towers are extremely common in World of Warcraft and can be found all over Azeroth, Outland and alternate Draenor, anywhere orcs also are. A named one is the Razor Hill Watchtower. Fortified towers can also be found in the Alterac Valley battleground, like the Iceblood Tower. Finally, the Mag'har are known for having a different architecture, including their own watch tower style.

Troll watch towers identical to the orcish ones can be found, such as at the entrance to Zul'Gurub and at Sandsorrow Watch in Tanaris.

The humans are also known to build tall wooden structures resembling the orcish watch towers. There is no way to get up into them and they are strictly used for show. Examples of these can be found in Fray Island, Alcaz Island, Light's Point, Scalawag Point and Marshal's Stand.