From Wowpedia
(Redirected from Watcher (titanic))
Jump to: navigation, search

For other uses, see Watcher (disambiguation). 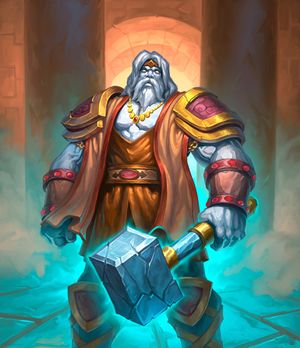 Sothis, another watcher in Hearthstone.

Titanic watchers[1][2][3][4][5] (or titan watchers[6][7] and simply watchers[8][9] or sentinels)[10] are the first generation of titan-forged, resembling giant humanoids. Most of them would later be tasked with the protection of specific places. The titan-forged were divided into the aesir, made of metal and master of storms, and the vanir, made of stone and master of earth.[11] A few are also made of ivory. After they destroyed the Black Empire, they participated in the ordering of Azeroth along their brethren.

Of all the aesir and vanir, several were imbued by the Pantheon with their specific likenesses and powers to lead the titan-forged armies against the Black Empire. These nine would become known as the keepers and would later create most of their lesser brethren.[11]

The power of a titanic watcher lies in its core.[12]

After Tyr helped five proto-dragons - Alexstrasza, Ysera, Nozdormu, Malygos and Neltharion - to combat the dread Galakrond in Northrend, the rest of the keepers except for Odyn approached them. Through them the titans of the Pantheon empowered the proto-dragons, transforming them into more elegant-looking and powerful beings, the first Dragon Aspects.[13]

The keepers of Ulduar served as Yogg-Saron's jailors after Prime Designate Odyn's disappearance, before falling prey to the corruption of the Old God. The primary watchers were freed from corruption, with the exception of Loken and Auriaya who were too far gone.

At least one, Freya, was shown to be able to leave an avatar of herself behind which would activate in times of need, the Avatar of Freya in Sholazar Basin. 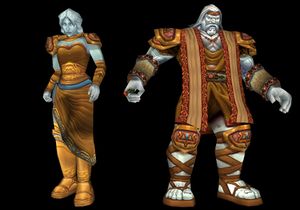 Uldaman, a vault made to protect the flesh-cursed Earthen as well as the Discs of Norgannon, was protected by Archaedas and Ironaya. A data construct, the Lore Keeper of Norgannon, presided over the hidden knowledge, including history of the earthen.

A titanic watcher, the Maiden of Virtue, appeared in Karazhan, obsessed with ridding adventurers of "impurity." 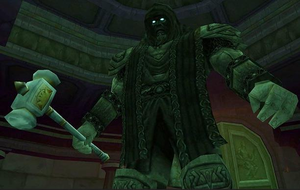 The titan facility of Uldum housed four watchers in the Halls of Origination: Ammunae, Isiset, Rajh and Setesh. Their function was to guard Uldum's mechanism of activating the reorigination process without the need of Algalon's Reply-Code Omega. These constructs wielded differing elemental powers.

While Akma'hat, an Uldum watcher, aided in the defense of the Halls of Origination, others were seen serving the Neferset tribe during

Nablya oversaw the titan area of experimentation, Un'Goro Crater, while the The Etymidian waited for its time of need.

The Amathet, a faction of tol'vir who believe only they can protect the works of the titans, have found a way to construct Watchers. They reassemble broken ones at the Tombs of the Precursors.[14]

After Ra's disappearance, Lei Shen found and brutally defeated Ra-den and stole his powers, gaining some of his knowledge, and using it to unify Pandaria and its races under his iron fist, and becoming known as the Thunder King. Ra-den was imprisoned beneath the Throne of Thunder until adventurers freed him. His current locations and goals are unknown. Norushen would later aid the Horde and Alliance against the Sha of Pride before being slain by the sha.

Odyn, the Prime Designate of Azeroth, kept watch on Azeroth from the Halls of Valor, the afterlife for chosen vrykul warriors who die in glorious combat. These vrykul, brought to the Halls by val'kyr, become a part of Odyn's Valarjar army that has the goal of protecting Azeroth from all threats. However, a curse from Helya had trapped Odyn and the Valarjar within the Halls since their creation, until order hall leaders killed Helya, freeing the Valarjar from their curse.

Titan Keeper Hezrel maintains Uldir, but fell into misuse and was believed by the people of Nazmir to simply be an old statue. 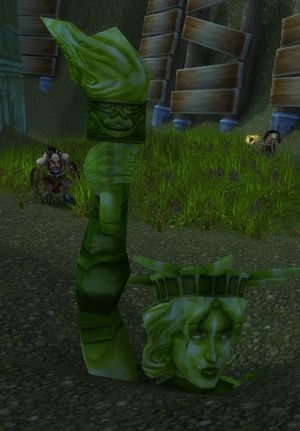