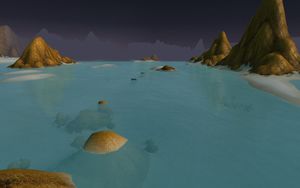 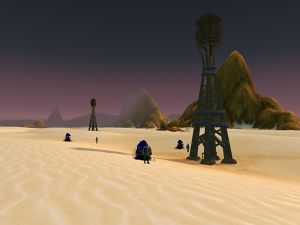 Waterspring Field being the flood

The Waterspring Field of Tanaris was named so because of the many water towers which pump the life-giving liquid from reserves deep underground. However, since the Cataclysm the entire field has been flooded from the South Seas.

The towers were built by the goblins of Gadgetzan in an attempt to provide water for their desert operations. However, these intentions were botched when a large group of nomadic bandits calling themselves the Wastewanders strolled in and claimed the field for themselves, selfishly hijacking the water towers in the process. The bandits now squat on the land hoping against hope that this home will be better than that one ogre camp. They still get the shivers thinking about it.

When Grizzek Fizzwrench sent Feathers to Teldrassil for help, Druz shot it,[1] and the robotic parrot landed on the southern coast of Waterspring Field.[2][3] As the Fourth War progressed, the coast's gizmo was being looted by the Venture Company.[4]