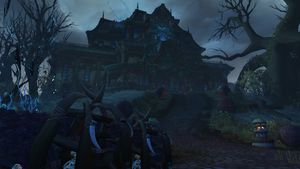 Waycrest Manor is a dungeon in Battle for Azeroth. It is the home and seat of House Waycrest, located at the northwestern cliffs of Drustvar.

Meredith Waycrest, now calling herself 'the Mother' as head of the Heartsbane Coven, tapped so freely into Gorak Tul's power that it emanates from the very walls of Waycrest Manor.[1]

Once the palatial estate of the[sic] Drustvar's ruling family, Waycrest Manor now serves as the focus of dark rumors since the Lord and Lady inexplicably locked themselves within its halls. Stories of foul rituals, people disappearing in the night, and horrible screams coming from within the home are common among the townsfolk. Amid all these whispers, only one thing is known, something evil has taken root within the Waycrest grounds.

The Inquisitors of the Order of Embers enter Waycrest Manor in pursuit of Lady Waycrest, and are attacked by wicker constructs and witches.

Making their way to the Ballroom, they confront the witches.

After their death, Yorrick stays behind while the group continues.

Through The Gallery, the group reaches the exterior court where they encounter an immense wicker construct barring their way.

Notley stays behind as the rest of the party progresses forward.

Moving on to the Banquet Hall, they find the grotesque, former chef of the Waycrests, now twisted into an aberration.

After his death, Sterntide remains behind while the rest of the group continues.

With all her horrors dead, Lady Waycrest exclaims:

The party continues through the Kitchen, then through The Cellar. Lucille and Mace have a little conversation on the way.

The group finally reaches the Catacombs, where they face the horror that Lucille's parents have become.

After her parents' death, Lucille is relieved. But this doesn't seem to end here.

Gorak Tul has entered the physical world through The Rupture.

Fortunately, the Inquisitors managed to push Gorak Tul back into Thros. His image gives a last ominous warning before disappearing.

Gorak Tul yells: Fools... you have merely... defeated... a vessel...
Gorak Tul yells: I await you... in the Blighted Lands...
Inquisitor Yorrick says: We've done it! Gorak Tul has been banished.
Lucille Waycrest says: Thank you, heroes. You've broken the coven and released us from Gorak Tul's power. We are in your debt.

Once the five witch ambushes have been dealt with, and the instance has been cleared, music from various Blizzard games can be heard played on the organ in the manor.