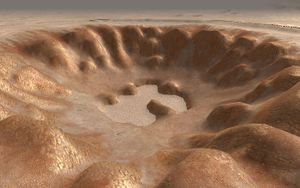 Weazel's Crater is a large, deep crater located in the northern part of the Shimmering Flats. Its origins are mysterious, but its name suggests either who found it or who created it. Due to the fact that there are often goblin and gnome races around the area in highly dangerous cars (as seen by the many bits of rubble and craters scattered about) perhaps this is a result from a rather unstable invention.

It's currently inhabited by Saltstone basilisks. 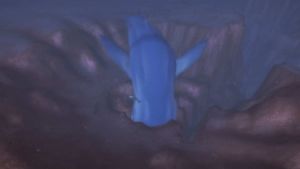 The Whale Shark resting in the remains of the Crater

Weazel's Crater, like many landmarks in Thousand Needles, is flooded during the Cataclysm. It becomes part of the Mirage Abyss and contains the carcass of the notorious Whale Shark.

While the actual subzone does not exist anymore, the crater is still very much noticeable.