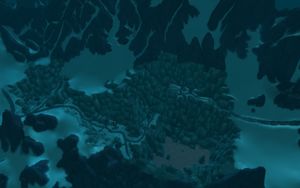 is a Saronite mine used by the Scourge. It is located to the south of the Shadow Vault. The player is sent here by Keritose Bloodblade to shut down and investigate the mining activity, to find out where all the saronite is going to and put an end to this. First the player must take control of an Eidolon Watcher by using the Eye of Dominion and weaken the defenses for the upcoming assault by banishing the scourge crystals, distracting the plaguehounds and assassinating the ghoul lookouts. After this is done the player is sent to bombard the Scourge and stealing the documents to find out where the saronite is being sent to. After these quests are done, Keritose finds out that the saronite is being sent to Malykriss: The Vile Hold and sends the player there. 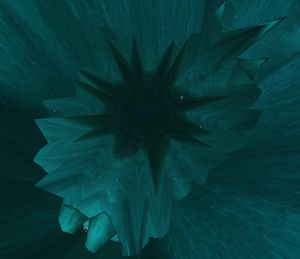 A screenshot of the "mouth"-like presence under the water in Weeping Quarry.

There is a kind of maw at the bottom of the water in the center of the quarry which moves and seems to be alive. Perhaps one of the "thousand maws" of the Old God Yogg-Saron or a different Old God. It looks similar to and shares the model with C'Thun.[1] It is possible to swim into the mouth and past it. The mouth seems to disappear with only the corners remaining.