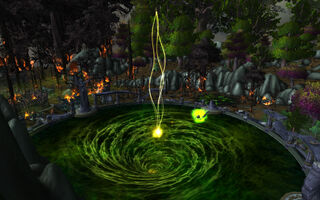 The original Well of Eternity, in its corrupted state during the War of the Ancients (in-game representation)

The Well was the central focus of the Burning Legion's invasion during the War of the Ancients, and the area around it served as the final battleground of the conflict. Its waters were so powerful, that the demons hoped to bring Sargeras himself to Azeroth by turning the Well into a great portal. The Well's ensuing destruction physically changed the geography of the planet, and heralded a new era in Azerothian history. Shortly after this, a second Well of Eternity was created at Mount Hyjal by Illidan Stormrage, who preserved water from the first Well in magical vials.

The original Well of Eternity was formed from a great wound in Azeroth's surface, created when Aman'Thul, the Highfather of the titan Pantheon, ripped the Old God Y'Shaarj from the world's crust and tore it apart. The volatile arcane lifeblood of Azeroth's world-soul rushed to the surface and roiled over the world. It was through this event that the Pantheon realized that the Old Gods had embedded themselves too deep in Azeroth's surface to remove without severely harming the world-soul, and so they instead resolved to imprison the vile entities below the surface of the world.[1]

The ordered Azeroth after the fall of the Black Empire, with the well in the continent's center.

After the Old Gods and their elemental minions had been defeated and sealed in their prisons, the titans' most powerful servants — the keepers — set to work to seal the still-bleeding wound. After having labored day and night to construct magic wards around the wound, the tumultous arcane energies eventually calmed and settled into balance, and the keepers named it the "Well of Eternity".[1] The enormous lake became the true heart of the world's magic and natural power. Drawing its energies from the infinite Great Dark Beyond, the Well acted as a mystical fount, sending its potent energies out across the world to nourish life in all its wondrous forms.[2] The Well accelerated the cycles of growth and rebirth, and before long, it caused sentient beings to evolve from the land's primitive life forms.[3]

Keeper Freya soon set to work to populate the world with life. She created great enclaves of life at the locations where the Well's energies had coalesced — the areas that would later become known as Un'Goro Crater, Sholazar Basin and the Vale of Eternal Blossoms. She nurtured and molded various life forms and seeded them around the world, the greatest of which were the colossal animal spirits known as the Wild Gods.[4]

Some legends say that from this magical ether the silithid were born.[5]

Among the first and most prolific creatures to emerge from the primordial wilderness were the trolls.[3] In time, a tribe of dark trolls[6] came to settle near the translucent waters of the Well. Over time, the Well's cosmic power affected the tribe, making them wise and immortal. Their skin turned various shades of violet, and they gained a shorter, yet more upright stature. Inspired by titanic words found on titan-forged relics around the Well's periphery, the tribe adopted the name "kaldorei", meaning "children of the stars". They believed that their moon goddess, Elune, slept within the Well's shimmering depths during the daylight hours.[7][8]

The night elves and the War of the Ancients

The kaldorei, or "night elves", soon built a wondrous society around the Well. They built their capital, Elun'dris, on the Well's shores and honed their ties with the surrounding woodlands. Soon, however, a small group of elves, later known as the Highborne, became obsessed with unlocking the Well's secrets and began rigorously studying the lake's arcane energies.[9] It is said the

[Heart of Zin-Azshari] was key in the elves' dominance of the Well of Eternity.[10] Later, Sargeras convinced Queen Azshara and her Highborne to create a portal in the Well, leading to the first invasion of the Burning Legion. Following the War of the Ancients, the Well of Eternity was destroyed, and most of Kalimdor with it, leaving only the Maelstrom.

However, Illidan Stormrage had filled seven magical vials with water from the Well of Eternity, and he poured three of the magical vials of water into the lake at the top of Mount Hyjal, creating a new Well. For this insane act, his brother Malfurion and the demigod Cenarius imprisoned him deep beneath Mount Hyjal. The new Well was completely covered by the growth of the World Tree Nordrassil, bringing it into balance, further aided by the enchantments of the Dragon Aspects.

However, Illidan had not emptied all of his vials in creating the second Well of Eternity (which is why the Aspects were able to enchant the World Tree with no interference). Somehow, the Highborne under the leadership of Dath'Remar Sunstrider had acquired one of the remaining vials and, after founding their new homeland of Quel'Thalas, used it to create the Sunwell. At least two of the last three vials somehow found their way back into Illidan's possession, and he gave one each to his lieutenants, Lady Vashj and Kael'thas Sunstrider.[11] They remained in their possession until the Scale of the Sands recruited adventurers to take them back. These vials are now in the hands of Soridormi, prime mate of Nozdormu.

The first Well of Eternity was an incandescent and shimmering lake of energy.[12][7] As the Highborne's obsession with the Well grew, they recklessly drew magic from its depths, throwing it into constant turmoil. Dark storms broke out over its surface, and its waters darkened until they became utterly black.[13][14] The physical dimensions of the Well were only a trick of the mind. The true Well existed in a thousand dimensions, a thousand places, simultaneously.[15]

Although the original Well of Eternity appears in the titular five-player dungeon, it's portrayed as considerably smaller than in lore, as well as much smaller than the in-game portrayal of the Maelstrom which occupies the exact same space.

The second Well of Eternity beneath Nordrassil.

Speculation about the final vial Illidan took from the Well points to its original host. It is unknown whether or not Illidan was in possession of it at the time of his death at the former Temple of Karabor, Black Temple.

It is also possible (but not certain) that the final vial was used by Illidan during the War of the Ancients, to defend himself against the Abyssal Doombringer in the Well of Eternity instance. The uncertainty stems from a scene where Malfurion sees Illidan with his hand in the Well after the battle, leading to the possibility that he may have refilled it.

In Mists of Pandaria, Kanrethad Ebonlocke notes that the powers of the Shrine of Lost Souls in the Black Temple are very similar to the Well of Eternity.[17] Thus, it is likely that Illidan used the final vial to power the shrine as a source of arcane power to help assuage his allies' fel addiction.

The Well of Eternity may have had some sort of connection to the Elemental Plane, as the Maelstrom was used by Deathwing to escape from Deepholm.

[Sharas'dal, Scepter of Tides], made with water from the Well, is described as being made of "living water" and is capable of controlling creatures of the sea such as sea giants and makrura.[18]