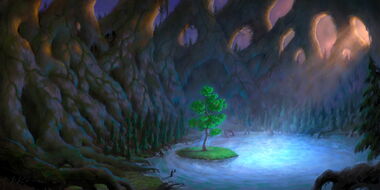 The second Well of Eternity beneath Nordrassil.

“And the tree, whose roots go deep, will keep this lake as it is.
The sun will always be a part of this well. The black waters will not run here.”

The Well of Eternity (or simply the Well)[2] at Mount Hyjal is an immensely powerful pool of arcane magic that rests just beneath the World Tree Nordrassil at the mountain's summit. This well is referred to as the second Well of Eternity, the first having sat at the center of Ancient Kalimdor for countless millennia before its eventual destruction. The second Well of Eternity glows with an intense blue radiance and remains pure due to the deep roots of Nordrassil.[3] The World Tree was designed to keep others from abusing the magic of the new Well, and also to prevent the second fount's power from growing too great overtime.[4]

At the end of the War of the Ancients, when the original well imploded in on itself, the night elf Illidan Stormrage rescued several vials of its waters from destruction. After the ensuing Sundering, he would forge a new, second Well of Eternity using three of these vials. However, Illidan's actions were regarded as a crime by his kin; to both protect and control this new font of power, Nordrassil was grown atop it.

Since its birth, the second Well has been a target of destructive forces, and was unsuccessfully attacked by the Burning Legion during both their second and third invasions of Azeroth. 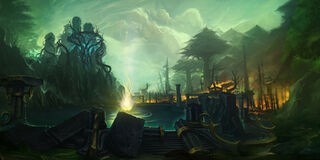 The original Well, at the heart of the Kaldorei Empire (concept art)

The first Well of Eternity sat at the center of the ancient continent of Kalimdor since its formation by the Titans, existing as the very lifeblood of Azeroth's world-soul made manifest. Its constructive power gave birth to the Kaldorei Empire, but also drew the attention of the demons of the Burning Legion. Though their following invasion failed, the Well was irreparably destabilized and collapsed in on itself in a vast explosion.

Just prior to the Well's death, the legendary night elf Illidan Stormrage secretly gathered seven vials of its waters. Illidan remained convinced that a new font of power would be needed if the demons' were to return, and hoped to create a new Well of Eternity to realize this. The other kaldorei survivors, however, would consider Illidan's plan both dangerous and insane, for it was the Well's power which first drew the Legion to Azeroth.

Illidan traveled to a lake at the summit of Mount Hyjal, a body of water luckily untouched by the war. There, he began emptying the vials of the Well's water into the lake, which began to take on the properties of the Well of Eternity. By the third vial, he was interrupted by the other night elves present, who were horrified upon realizing exactly what Illidan was doing. When they moved to stop him, Illidan struck at his kin, killing most of them with magical flames.[5] Only the intervention of his brother, Malfurion, halted Illidan's rampage. However, even three out of seven of the vials was enough to transform the lake into something approaching the previous Well.[6]

A second Well of Eternity had been created, possessing a large portion of the enchanting and dangerous power of the first. With the help of the Dragon Aspects, Malfurion and the other night elves oversaw the planting of a World Tree above the new font, anxious to protect and contain its energies. The three Aspects present (Alexstrasza, Ysera, and Nozdormu) also placed their own enchantments on the tree. Over the following millennia, Nordrassil and the second Well became sacred to the new night elf civilization, who guarded both with fierce determination.

The Well in World of Warcraft

As was feared during its creation, the existence of a new Well of Eternity would become another target for the Burning Legion. After over 10,000 years, the demonic armies of Sargeras once more invaded the world. Leading the assault, Archimonde the Defiler marched on Kalimdor with the Well and World Tree as his goals.[7] The Legion planned to consume the concentrated, powerful energies contained within Well[8] and conquer Azeroth once and for all.

Though they mounted a defense, both individually and eventually united, the races of Azeroth could not withstand the Legion's relentless advance. In a last ditch effort, armies of the kaldorei, Horde, and Alliance tried to hold Archimonde back at Hyjal's summit to buy time for Malfurion Stormrage. When the Defiler reached Nordrassil and victory seemed at hand, a trap was sprung. A great explosion detonated by wisps vaporized the demon lord, in addition to severely damaging the World Tree. Nevertheless, both the Well of Eternity and the tree survived, and were safe for the time being.

The Well was left untouched for many years following the Third War, while Azeroth's druids maintained a close watch on it and Nordrassil. During the Cataclysm, both would be threatened by the elemental invasion of Ragnaros, the Firelord. The very shores of the Well would became a base for the Guardians of Hyjal. After much fighting throughout the region, this attack was eventually defeated.

During the third invasion of the Burning Legion, the demons once again targeted the Well atop Mount Hyjal. The Legion wanted to open a gateway within the pool itself, and spill forth to overwhelm the area's defenders. Druids of the Dreamgrove arrived to drive back the invaders, also seeking the waters of the Well in order to purify G'Hanir. Together, they drove the demons back and slew their leader Destromath. This harmed the Well terribly but, despite being heavily depleted, so long as a single drop remains, it endures.[9]

Later, the Well is shown whole when the Archdruid of the Cenarion Circle, Keeper Remulos and several other druids attempted to commune with Malorne.[10] Later, the

[Alor'idal Crystal] given by Illidan to Tyrande summoned past visions of Tyrande, Illidan and Malfurion that transformed into sparkles and dived into the Well.[11]

During the Fourth War, Azerite scars and elementals appeared at the roots of Nordrassil. Aviana came to aid, fighting against an Azerite Leviathan that had emerged in the lake.[12]

After the war, when Thrall, Baine Bloodhoof, and Calia Menethil went to a meeting with Tyrande Whisperwind in Nordrassil, Calia noticed faerie dragons chasing each other across the surface of the lake below Nordrassil. The Horde leaders met with the night elven co-leaders in a bower on a hill, on the opposite side of the lake from Nordrassil Inn.[13]

Nordrassil in Lands of Conflict.

Following its birth, to protect the World Tree Nordrassil and continue to guard the Well, Malfurion gathered all the druids into a conclave, where they underwent a great slumber, sending their spirits into the Emerald Dream. A great barrier of mist grew around Kalimdor, to prevent eyes even in Azeroth from finding the Well.[14] Thanks to the World Tree, the Well of Eternity itself no longer provided the Twisting Nether with such a potent source of corruption.[15]

The glowing, swirling pool ways once a sizable lake. It extends around Nordrassil, creating a layer of protection around the Tree. Its mystic power is so potent that none who attempt to drunk from it - or, foolishly, swim in it - can hope to survive, assuming that the ambassadors would let anyone get close enough to make the attempt. The Eternity Bridge arcs from the south shore of the Well to the massive roots of Nordrassil.[16] The magic of the Well and the Tree make the creatures of Hyjal stronger and smarter than those anywhere else on Kalimdor.[17][18]

Coveted by demons, warlocks, and many mages, the well is currently the greatest source of arcane magic in the world. While the World Tree's powers have suppressed the corrupting nature of this magic for centuries, if the tree were ever destroyed, this Well would be the source of unfathomable power to an evil creature powerful enough to wield it. The Tree and the Well are now guarded by the blue, red, and bronze dragonflights. Brann Bronzebeard feared that the remaining demons were tunneling from the Darkwhisper Gorge closer to the Well.[19] Eventually, blue dragons discovered that demons led by an eredar warlock were draining the waters of the Well into the tunnels. The warlock planed to consume the water in a ritual in an attempt to gain enough power to resurrect Archimonde.[20]

Alexstrasza believed that the water from the Well of Eternity could restore the defiled Sunwell.[21] Illidan Stormrage wanted to create another Well of Eternity on Outland to fuel his blood elves' magical addiction.[22]