Not to be confused with yeti or sasquatch.
For the mob, see Wendigo (mob). 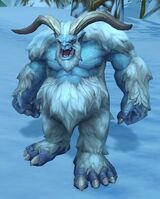 Wendigo (sometimes pluralized as wendigos)[1][2][3] are large, furry, horned humanoids similar to yeti and sasquatch. They are indigenous to Northrend[4] but can also be found in the mountains of Dun Morogh. Cannibalistic, savage and exceedingly voracious, wendigo are solitary by nature and rarely live amongst others of their kind. They are highly territorial and do not take kindly to intruders strumbling into their hunting grounds.[4]

The wendigo of Northrend are believed by many to be the primordial cousins of the southern variety that dwell in Dun Morogh.[5] They differ in appearance from their southern cousins, being significantly larger with more ape-like builds and curved horns. Though rarely seen, the existence of the northern wendigo is evidenced by the fierce, primal roars that echo across Northrend's mist-shrouded peaks. Dwelling in bone-littered caves and venturing out only to hunt, they are ferocious and aggressively defend their lairs, food supply, and young from any perceived threat. Adventurers who do not wish to be added to the wendigo's bone-mounds would be wise to run at the sound of their savage bellows.[5]

Wendigo, along with ice trolls, were among the races enslaved by the newly created Lich King shortly after the Frozen Throne crashed into the Icecrown glacier.[4][6] After the end of the Second War, a group of dead wendigos was found by Korialstrasz in the Nexus.[3]

They often have frost breaths or frost roars attacks.

A wendigo shaman in Warcraft III.

In Warcraft III: Reign of Chaos and The Frozen Throne, wendigos appeared as white-furred humanoid creeps. Some of them showed signs of intelligence, with the ability to use shaman- or druid-like abilities like

In the canceled Warcraft Adventures, wendigo were shown to live around the Frostwolf Settlement area. One of them had killed the wolf mount of Nazgrel, and Thrall saved the orc by scaring the beast away with fire. The raider turned out ungrateful about this help, for the wendigo was initially the target of his hunt.

Wendigo often range in levels of 5-7 and are often hunted en masse in central Dun Morogh. Wendigo can be skinned at apprentice level.

The indigenous wendigo of Northrend are exceedingly voracious creatures. Cannibalistic and savage, these fur-covered humanoids are very territorial and do not take kindly to intruders stumbling into their hunting grounds. They take even less kindly to those who enter their lands intentionally. This tall, muscular humanoid is covered in shaggy fur. Its feet and clawed hands are huge, and a pair of deadly horns crowns its head. The hulking humanoid stand 10 feet tall. It looks vaguely ogre-like but is covered in a fury white pelt. Sharp claws extend from its large hand and its mouth stretches in a ravenous grin as it shambles forward. Wendigo are fierce predators that are fond of human and orc flesh. Solitary by nature, they seldom live among others of their kind. The only exception is when offspring must be reared, which the parents do as a family. Wendigo typically give birth to two young per litter. The parents drive off the young once they reach maturity, then go their own separate ways as well. (A wendigo is considered fully mature when it reaches nine years). Otherwise, an encounter between two wendigo always ends in the death of one, even during times of mating. Each wendigo controls miles of territory. It is not unusual for one to spend weeks hunting a single meal.[8][9]

Wendigo are bestial, cave-dwelling humanoids. Barely intelligent, these creatures prefer to remain hidden when travelers pass close to their territory. A wendigo’s behavior turns aggressive, however, if a visitor overstays his welcome or threatens the yeti’s family. It is possible for a small tribe of wendigo to go unnoticed by a nearby community for years. The townsfolk may tell tales of beast-men living in the woods, but few residents, if any, see one directly. Wendigo living in close proximity are not necessarily a threat, and rumors say that some adopt and protect small villages, eliminating dangers from the shadows.[9]

A wendigo prefers to avoid combat altogether, but once angered, just about the only way to stop it is to slay the beast.[9] Wendigo attack with their claws in combat. They are so adept with their natural weapons that they can fell several lesser creatures in a single round. Even young wendigo can be quite lethal in combat. They are not suicidal, however, and will break off combat with a superior foe. The wendigo will then stalk the prey, biding its time until the target offers the best time to be dispatched.[10]

An adult wendigo stands well over 7 feet tall and weighs about 1,200 pounds.[9]