What's going in the grey?

A small, nearly inaccessible coastal zone west of the Stonetalon Mountains and surrounded by mountains on the western coast of Kalimdor. It appears on most world maps, but is not clearly demarcated and has yet to have a name or significant information.

It is not accessible by foot, however, it is completely empty. There are three small points of interest from it: An empty Venture Co camp, some night elf ruins and a troll hut to the north.

This area - similar to Northshire River - is viewable while taking a taxi flight, and was presumably intended as eye candy for the long flights that pass through this area. 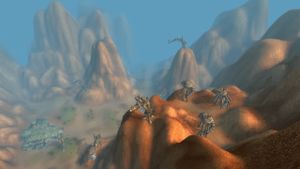 Around the mountains of the area, down to Sun Rock Retreat, before Patch 4.0.3a a logging camp could be seen in the middle of the mountains. This camp consisted of many cranes on mountains, a shredder with walkway, an entire lumber mill, a crane with a swinging bunch of logs, and a cave with a see-through wall. There was also a burning airplane (the same as the ones found in Gnomeregan) that sits atop a cliff on the lower part of the mountain wall, not too far above the cave. The plane appears to have crashed into the mountain wall. Further exploration leads to a little cliff, a little to the west of the burning plane, that contained three small helipads. Two of which were occupied by the same type of airplane, one was empty, and one had a deactivated shredder standing next to the ramp that led up to the plane.

The Logging Camp has been removed. Now, Alliance have a new town, Thal'darah Overlook, to the SE of the intact Talon Den; opposite Thal'darah and very high in the mountains is a new Horde establishment, with flight path, called Cliffwalker Post, accessible by lift; the mountains south of Stonetalon Peak have opened into two new areas: the northern most is Battlescar Valley where the Horde and Alliance are fighting, and the new area adjoining this is Thal'darah Grove – beyond which lies Farwatcher's Glen, another Alliance controlled hub with flight master manned by Night Elves and Worgen.

Here are a few more links with the Logging camp, the night elf ruins and the troll hut.