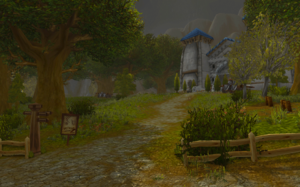 The road to Westbrook Garrison. 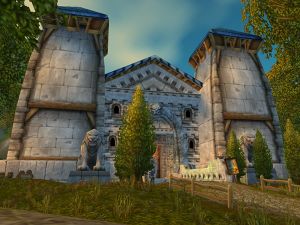 Westbrook Garrison is a barracks located in Forest's Edge on the western end of Elwynn Forest near the border with Westfall. Beyond the garrison lie the dry fields of Westfall, currently controlled by agents of the Defias Brotherhood and their dreaded mechanical harvest golems.

South of the garrison the forest is full of Riverpaw gnolls. Beyond, only a river separates Elwynn Forest from shadowy Duskwood.

Several wanted posters at the garrison give the quest to kill Hogger, an elite gnoll found in the camps to the south. 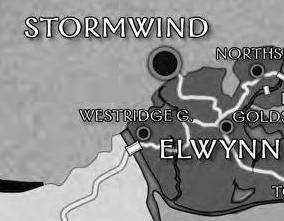 The garrison holds Elwynn's western border and protects the region from gnoll attacks. The soldiers and mercenaries within are a loud and brawling bunch, eager for tales from the road; they enjoy a good mug of ale and a good fight.[1]

There are several military units in Westbrook Garrison, and Captain Sumner Trask is one of the commanding officers there. The Garrison holds the community of Westbrook and ensures that gnolls and bandits do not gain a strong foothold in Stormwind-held territory. The Stormwind Guard tends to use Westbrook Garrison as a testing ground for newly initiated knights.[2]

The map of Azeroth in Lands of Conflict misspells the name of the garrison as "Westridge G." instead of "Westbrook G." and several other minor mentions about a community called Westridge are made.[3] However, Westridge doesn't appear in the index at the end of the book, and the misspelling of "Westbrook Garrison" suggests that all mentions of Westridge were instead meant to be about the community of Westbrook situated near the garrison.

Brann Bronzebeard aided a dam building crew near Westridge for a week of free ale.