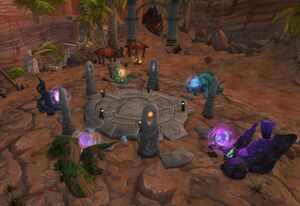 The Western Earthshrine is a ritual circle erected by the Earthen Ring for use by the Horde. It is located in the city of Orgrimmar, on a high ridge overlooking the Valley of Wisdom, accessed by a series of bridges from the Orgrimmar Skyway. Its Alliance counterpart is the Eastern Earthshrine in Stormwind City.

The Earthshrine has portals to Tol Barad and to all of the new zones in Cataclysm. The portal to Tol Barad Peninsula is always present (although unusable until level 85) and the others are unlocked after completing the introductory quest for each Cataclysm zone.