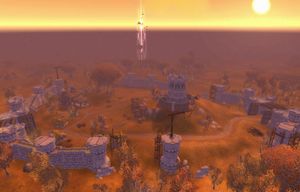 The Westfall Brigade, formerly known as the People's Militia, is primarily a human organization comprised of citizens of Westfall and veteran militiamen that fought back the Defias Brotherhood. They distinguished themselves during the war against the Lich King, the results of the Cataclysm and the third invasion of the Burning Legion.

Originally formed as the People's Militia, the organization began its life as a volunteer military organization based in Westfall and focused on defeating the Defias Brotherhood. It was founded because the general notice in the area was that "Stormwind has abandoned Westfall". The initiative was based in Sentinel Hill but protectors could also be found wandering various nearby roads. Members of the militia also enlisted young adventurers to thin out the local gnoll population and deal with other various threats. Their leader, Gryan Stoutmantle, directed them from the lower section of Sentinel Tower in Sentinel Hill.

Under the command of Captain Gryan Stoutmantle, they were a part of the Valiance Expedition in Northrend. The Westfall Brigade Encampment is nestled in the northern reaches of the Grizzly Hills in eastern Northrend, and have been charged with finding a route into the northern territories and to secure secondary resource points in the Grizzly Hills.[1]

After their tour of duty in Northrend, the Brigade returned home to Westfall, where they found that the cost of the war had left thousands homeless, who then migrated to Westfall to squat on many of the abandoned properties. The Brigade fortified Sentinel Hill, and with the full support of King Varian Wrynn started working on cleaning up the mess left behind by the Defias, expanding the reach of the Alliance and maintaining order.[2]

When the Legion assaulted Westfall, the Brigade was among the defenders of the region.