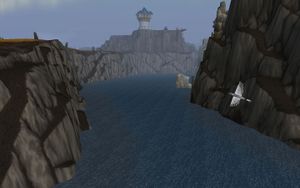 The Westrift is a fjord which separates the rest of the Borean Tundra from the mountainous island of Coldarra.[1] A broken bridge spans the Westrift into the nearby island. 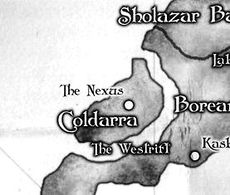 The Westrift in Lands of Mystery.

Just above the Borean Tundra's southwest tip is the Westrift, a tremendous tear in the ice that stretches for miles. It separates the region from Coldarra, and the only place to cross it is a lone bridge near the center.[2]

After the black dragon Deathwing attacked the blue dragons millennium ago, slaughtering them by the dozens, the survivors fought back but were no match for Deathwing's ferocity. In the process, their homes were destroyed and the land so damaged it could never recover. That area became the Dragonblight and Malygos, who lived in some icy hills to the west, in his rage and grief, split his home from the rest of the land, creating the gap later named the Westrift.[3]