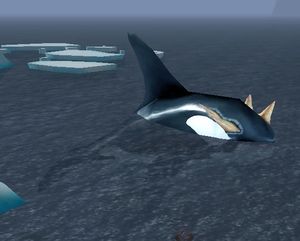 An orca in WoW. 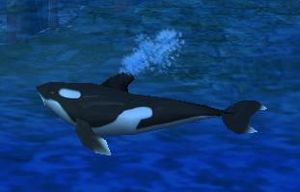 An orca in WCIII.

Whales are large sea mammals. The main whale featured in Warcraft is the orca.[1][2] Whales produce

[Whale Statue] can be found in Bag of Fishing Treasures.

The fish-like kraken might be whales, but those seem to be some kind of amalgamation of various aquatic creatures and not strictly whales or fish.

Despite their name, whale sharks are sharks, not whales.

This section concerns content related to Wrath of the Lich King.
From

World of Warcraft Community Site Tuskarr feature of the official Wrath of the Lich King site:

Yet even their enemies marvel at the tuskarr's prowess and fearlessness in catching some of the most dangerous creatures in Northrend's frigid waters, including whales and giant squid. Not even the unnamed leviathans that lurk in the ocean's depths are beyond the tuskarr's reach.

In Battle for Azeroth

Players can use the

[Secret Fish Goggles] to find a

Many sea creatures can be found dead on various shores in World of Warcraft, including giant turtles and threshadons. Two of these creatures, which have only been seen dead, have been identified as unknown types of whales. One is a large creature resembling a threshadon,[4][5] and the other is a creature with legs and four eyes that is found around Pandaria.[6] The skeletons of more traditional baleen whales can be seen throughout Vashj'ir.

Whales are sea mammals. They can be summoned by a druid in aquatic or watery environments as a nature's ally.[7] Some varieties of these seagoing mammals are among the largest animals known. Relatively small whales (such as the orca) can be vicious predators, attacking virtually anything they detect. Whales can "see" by emitting high-frequency sounds, inaudible to most other creatures, that allow them to locate objects and creatures within 120 feet. A silence spell negates this and forces the whale to rely on its vision, which is approximately as good as a human's. A whale can hold its breath for a long time before it risks drowning.[8] The tuskarr can point out every kind of whale imaginable and a few that may not be real, and they hunt all of them.[9] Whales are considered a delicacy among magnataur, and those who are able to catch them frequently are highly respected.[10]

A plankton-feeding whale between 30 and 60 feet long, such as gray, humpback, and right whales. These massive creatures are surprisingly gentle. If harassed or provoked, they are as likely to flee as they are to retaliate.[8]

Also known as sperm whales, these creatures can be up to 60 feet long. They prey on giant squids.[8]

These ferocious creatures, also called killer whales, are about 30 feet long. They eat fish, squid, seals, and other whales.[8]

Porpoises are a small type of whale.[7]

In Manual of Monsters Appendix Three, a creature called Maelstrom Leviathan is a corrupted whale, however the validity of the source is disputed.