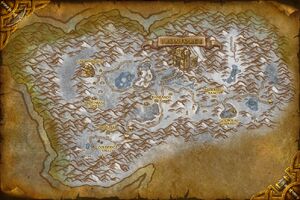 Retrieve 6 Recovered Possessions from Toxic Sludges at the Toxic Airfield.

Most of us have seen the sickly and deranged gnomes suffering from exposure to the poisons and radiation of Gnomeregan. Eventually, they will devolve further, until they become mindless, but mostly harmless, puddles of toxic sludge.

My research suggests that we may even be able to restore them from this state. Go to the Toxic Airfield to the south, subdue the toxic sludge I told you about, and bring back the possessions of the gnomes they once were.

Were you able to recover the belongings of any of the irradiated gnomes?

I can't wait to give this new technology a try! We've lost more gnomes to radiation than we can count. It's time to turn that around!

[2 - 60] A Job for the Multi-Bot from Engineer Grindspark to the southeast before heading out. Also, just to the south of the building with the warlock trainer is

[2 - 60] Dealing with the Fallout from Corporal Fizzwhistle. The Toxic Sludges are small oozes wearing deepdive helmets. Kill them to loot their possessions.

Tock Sprysprocket says: My brother has spent years working on a cure for leper gnomes. Using his notes, I think I've perfected a process for restoring gnomes who've devolved to sludge.
Tock puts a helmet on the chair.
Tock says: Let's give this a try. Goggles, everyone!
Tock activates the device next to him. Blue light comes out of the machine and suddenly, a Recovered Gnome appears on the chair, wearing the helm!
Recovered Gnome says: What... what happened to me?
Tock says: Absolutely amazing! We've done it!
Tock says: Sure, he's a little small, even by gnome standards, but he's all there! The real question is, what will he remember?
Recovered Gnome says: Don't talk about me like I'm not here! All I know is I'm hungry and I need to get out of these hideous, smelly clothes!
The recovered gnome starts walking away.
Tock says: Wait, come back! I have readings to take!
Tock says: You need to see a medic!
The recovered gnome explodes, getting launched sky-high!
Tock says: Better make that a rocket scientist.

The direct followup to these three quests is

[3] What's Keeping Jessup? from Captain Tread Sparknozzle. However, after completing this round of quests, players should have reached level three. Class trainers now offer their first quest, so check in before heading down to the Frostmane Hold.