What Must Be Done 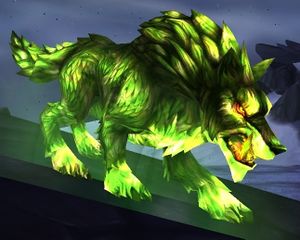 Collect the Mother of Wolf's Corpse and bury it at the graveyard outside of northern Throm'var.

I believe we have seen this demonic corruption your friends speak of.

The mother of wolves has not been herself lately. Now, her pack has her surrounded.

The wolves are protecting our hunters and will not let them near. They're not likely to stop you, though.

If the alpha mother is infected with this fel-energy, then she must be put down.

You would greatly honor the Frostwolves by returning with her corpse and giving it a proper burial.

("The Mother of Wolves: End her suffering and bury her remains in the graveyard.")

Is it done? Does the Mother of Wolves finally rest in peace, <name>?

Unfortunate that there are those that would pervert such noble creatures.

You have honored their family once more, <name>. They will not forget.

Now is the time to take the fight directly to the Shadow Council.

[94] A Clew of Worms before heading out. The Mother of Wolves is southeast of Throm'var at the Frost Den, surrounded by a pack of friendly frost wolves. Attack her and the wolves surrounding her will try to help out. At 75% she spawns two Tainted Tentacles from her back that also strike at the attacker.

[Mother of Wolves' Remains] from her corpse, and head to the northwest entrance to Throm'var, the one closest to the flight master. Just outside camp is a pile of snow. Interact with it to bury the wolf: