Whelgar's Retreat is a dwarven outpost in the Wetlands on a hill outside the Whelgar Excavation Site. Prospector Whelgar and his crew are searching for artifacts and fossils in the excavation site at the behest of the Explorer's League. Formerly operating out of a cave overlooking the dig site, they were forced to relocate to the Retreat following the Cataclysm's earthquakes and subsequent earth elemental invasion and reanimation of fossilized dinosaurs. The Retreat happens to be dangerously close to a Dragonmaw Clan encampment, which worries the Prospector.

Two paths lead to the camp, from the east and west. The western path leading here is off the road from Menethil Harbor around [35, 38] 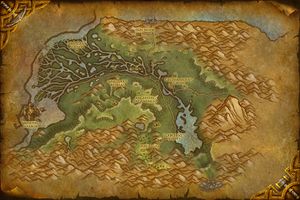 . It is marked by Explorer's League banners, torches, and dead raptors.