Where Are the Workers?

Find out where the Crushblow Peons went.

Look at this axe, <name>. There's still sweat on the hilt. The workers were here not too long ago.

Let's see if Sasha can track their scent.

This must be the place.

The peons are revolting? I'm surprised it took this long... 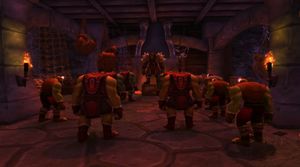 "When I'm warchief, peons will be respected members of the Horde!"

On accept, Kiro hops up on Sasha's back and rides off northeast, jumping over obstacles along the way:

Kiro says: Let's get moving. The peons can't be far.

Upon reaching the Dunwald Holdout, which now has a new area called the Peon Hideout:

Kiro says: Sasha's snout says this is the place. Maybe they're in one of these houses?
Kiro dismounts and goes to stand in front of the main building.
Kiro says: Head inside and check things out. I'll keep watch.

Head into the building and down into the cellar, where a group of Crushblow Peons are listening to a speech by Foreman Magrok.

Start questioning the peons, who all express their displeasure at the situation:

Why aren't you working?

(First peon) Tools broken. Had to use hands. Now they break too!
(Second peon) Peons treated like da poop. Never get nothing nice.
(Third peon) Always been a peon. Never nothing else. Maybe want more?

As soon as you finish questioning the workers, Magrok briefly resumes his speech:

Foreman Magrok says: When I'm warchief, peons will be respected members of the Horde!

Before you leave the cellar, Magrok has some gossip text as well:

You'd better be here to help the peon's plight, otherwise--get out!

Head back outside to turn in to Kiro.