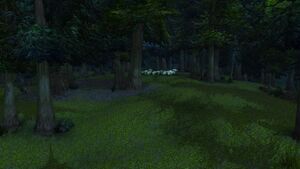 The Whispering Forest is a large forest located within the mountains of western Tirisfal Glades, just west of Deathknell. It is accessible via flight or by druids with Glyph of One With Nature. The forest contains families of diseased stags, does and fawns, rats and one diseased bear (lvl 80-84). To the north is an unnamed lake. Next to the lake is a chair and some fishing gear and bait. This is possibly one of the many odd places that Nat Pagle has visited.

Near the center of the forest is a mysterious ring of giant mushrooms, glowing with some sort of strange energy. A cloud of mist hovers over the circle, and the circle sits, glowing and otherwise unremarkable for hours on end. But every now and again, the faerie dragons - Fey-Drunk Darters - begin to appear, one by one, and fly erratically in the general area of the mushroom ring. Over time seven of them will fade in, and at some point all seven darters seem to come to some forgone conclusion and they converge on the ring. The Fey-Drunk Darters begin to sing. As they sing, beams of light shine from each darter, converging on the center of the mushroom ring. The other animals of the glen come to watch, curious about the lights and sounds no doubt, and just as suddenly as the mysterious ritual starts, it stops. The darters slowly fly away and fade out to wherever they happened to come from, and the stags, does, and fawns wander off. The event lasts around three minutes, and occurs four times per hour.

All of the above creatures are found nowhere in the world except in the Whispering Forest.

As of Legion a small camp with cultists is present:

Beneath the lake within the Whispering Forest lies a terrible, long-forgotten secret. Torn open by the Twilight's Hammer and their new Deacon, the former Bishop Farthing, the ancient tomb of the great titanic watcher, Tyr, has been revealed, as well as the final resting place of a terrible C'Thraxxi beast by the name of Zakajz the Corruptor. The Twilight Deacon seeks to revive of the corpse of Zakajz with

[Strom'kar, the Warbreaker], which for thousands of years has been consuming the dark energies around it.

It has been speculated that this might be the region of Tirisfal Glades where the high elves first landed in the Eastern Kingdoms, as noted in The Founding of Quel'Thalas:

His fleet finally landed on the beaches of the kingdom men would later call Lordaeron. Forging inland, the high elves founded a settlement within the tranquil Tirisfal Glades. After a few years, many of them began to go mad. It was theorized that something evil slept beneath that particular part of the world, but the rumors were never proven to be true. The high elves packed up their encampment and moved northward towards another land rich with ley energies.

The Fey-Drunk Darters may be trying to heal the forest from Zakajz's corruption.

The Whispering Forest is implied to have some link towards the Emerald Dream, such as the Emerald Nightmare.[citation needed]

It has also been suggested as the location of the chamber occupied by Krasus, seen in Day of the Dragon, possibly created by the Highborne, building off the speculation that this was their landing spot.