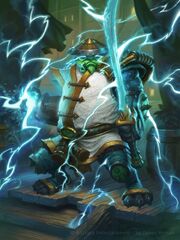 White Eyes as "The Storm Guardian".

White Eyes is a massive pandaren warrior who acts as the public figurehead of the Jade Lotus, one of the three crime families active in Gadgetzan in the Mean Streets of Gadgetzan expansion for Hearthstone.

White Eyes is said to be as immovable as a mountain, as pitiless as a storm, and as swift as lightning.[1][2] When his name is whispered throughout Gadgetzan, the hardened criminals shake in their boots,[1] saying things like "Hey, watch yer back, or White Eyes'll jump outta da shadows and getcha".[2] However, there is one thing that most people, even most members of the Jade Lotus, don't know, which is that White Eyes is not the true leader of the organization. In truth, he is the sworn and loyal bodyguard and servant of Aya Blackpaw, who issue orders to the rest of the crime family through White Eyes.[1][2]

White Eyes' shoulderpad is an ancient and extremely heavy pandaren bell, while his gauntlets are made from empty brewmaster kegs, thus demonstrating his immense size and strength.[1]

Summon
My life is your shield.

Summon
Bow before the fury of the storm!