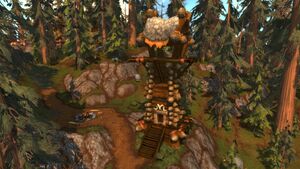 The trapper dissident Sasha is found here. After escaping captivity, she traveled here to question Wolfcult members about the location of her kidnapped sister. She killed most of them, leaving only Anatoly alive for questioning.[1] Although Anatoly remained adamantly silent, he was eventually convinced to talk when Sasha kidnapped his wife, Tatjana, and brought her here. In the end, Anatoly transformed into a worgen and killed Tatjana rather than give away the location of Arugal, the cult's leader. Sasha, in turn, killed Anatoly and proceeded to try and find her sister.[2]