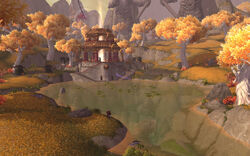 Whitepetal Lake is one of the larger lakes found in central Vale of Eternal Blossoms. The lake is fed by the water source in the mountains to the south near Mistfall Village and is overlooked by a temple on its eastern side.

The lake itself is filled with different fish, including frenzies, and crocolisks.

The feedback from the Sha of Pride has destroyed the source of water which fed the lake and quickly drained it as well. The land and creatures around the area have been corrupted.