Why Do We Fight? (quest) 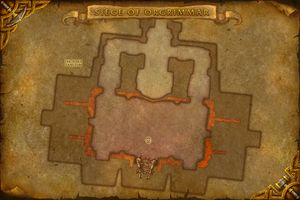 Why Do We Fight? wraps up the Mists of Pandaria storyline, with the reward being a cutscene between the player, Lorewalker Cho, Emperor Shaohao, and the August Celestials. This cutscene can be replayed by interacting with the Wisdom of the Emperor object next to Cho in the Vale of Eternal Blossoms.

Completing this quest also unlocks the objects Memory of the Alliance and Memory of the Horde (the nearby stone pillars), which will replay the respective faction cutscenes for the end of Siege of Orgrimmar.

Lorewalker Cho wishes to speak with you in the Vale of Eternal Blossoms.

Oh my friend, today you and your companions have put an end to the sha that has plagued Pandaria since before time was recorded. You have accomplished that which even the titans and their mogu servants could not: destroying the last breaths of Y'Shaarj.

Come, will you join me in the Vale of Eternal Blossoms? There is something I would like you to bear witness to.

Our precious Vale of Eternal Blossoms. So much destruction and violence. But... I sense a glimmer of hope. 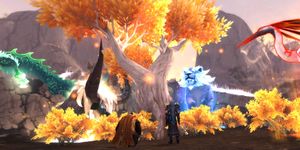 After completion, a cutscene begins:

Afterwards, Lorewalker Cho and the celestials have the following gossip text:

Lorewalker Cho
What you have achieved today will shape the face of Pandaria for thousands of years to come.
Thank you, hero. The Lorewalkers shall pass your story down from generation to generation.
Chi-Ji
This tree stands as a symbol of hope. Hope that the land might in time be healed and made stronger by your deeds.
Niuzao
<Niuzao nods approvingly at you.>
Xuen
Your strength has helped free this land of its long-held darkness. It is my honor to witness your deeds with my own eyes, Champion.
Yu'lon
There is much work ahead of us if we are to heal the land and mend our wounds. But thanks to your deeds we no longer must work in the shadow of one of the seven breaths of Y'Shaarj.
In time, the sha will cease to be, and your name will be remembered with the reverence of the last emperor.