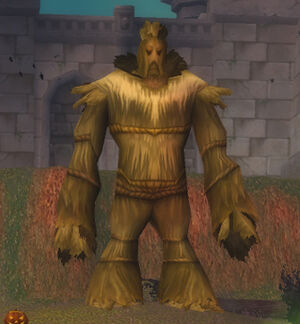 A Wickerman is a straw construct resembling a humanoid.

A Wickerman is burned by the Forsaken near the walls of Lordaeron during the Wickerman Festival to honor Queen Sylvanas and their escape from the Scourge. After the Cataclysm, Gilneas reintroduces the practice of burning the Wickerman to the Alliance. For the Alliance, the wickerman embodies any unrest, fear, or uncertainty within them. They set it ablaze with the hope of tempering themselves against whatever tomorrow may bring. Gilneans burn one outside of Stormwind City. Smaller wickermen are also burned in other parts of the world during Hallow's End in order to practice putting out fires from the attacks by the Headless Horseman. The Moonkin of Silvermyst Isle also have a Wickerman.

[Little Wickerman] is available for purchase during Hallow's End for 150 Tricky Treats.

For Level 3 garrisons, a Wickerman is also available for use during Hallow's End.

The Manual of Monsters Appendix Three also describes a necromantic creature called a Wickerman, however the validity of the source is disputed.

The Wicker Man was a large wicker statue of a human allegedly used by the ancient Druids (priests of Gallic paganism) for human sacrifice by burning it in effigy, according to Julius Caesar in his Commentarii de Bello Gallico (Commentary on the Gallic Wars). Wickermen are still used today in various neopagan and Wiccan groups but without the human sacrifice element.