The wildkin are serene, powerful creatures, thought by the night elves and tauren to have been created by the moon goddess Elune.[1][2] They resemble cross between a bear and a horned owl, which explains both their wisdom and ferocity.[3] They act as a powerful force for good and a staunch ally of the night elves. While good-tempered and wise, the wildkin fights fiercely against evildoers, especially undead and the forces of the Burning Legion.

These feathered creatures go by many names — moonkin, owlbear, owlbeast, ravenbear and owlkin, to name a few. These gentle giants possess a natural, druidic energy similar to that of the night elves.[4] Wildkin are inherently magical; this power was bestowed upon them by Elune.[5] Wherever they are found in the world, they are protecting something of importance, as they were entrusted to do long ago.[6] But if Elune's influence over them wanes or is cut off, the creatures can become dangerous.[7]

These bird-faced humanoids are considered an abomination by most, but actually find favor with night elves. The wildkin have long been considered a sacred animal by the night elves and the tauren. The priests of Elune see the wildkin as imbued with the spirit and strength of the Moon Goddess, and the druids see them as guardians and protectors of nature.[citation needed]  Wildkin lay eggs.[8]

They are capable of speaking Common. Moonkin children are taught dancing and using

[Moonfire], and they enjoy moonberries.[9]

A wildkin in Warcraft III.

Some night elf scholars claim that wildkin are the creation of Elune,[3] that she created them to guard all of her sacred places.[6] They claim that Elune created the first wildkin in the early days of the world to serve as guardians to Cenarius.[citation needed]  But now, many years later, the wildkin have grown more feral, and without the guidance of the goddess, they are confused. They wander without purpose, though many find their way back to the sacred areas that they once were sworn to protect.[6]

During the time of the Third War, besides regular wildkin, enraged and berserk wildkins could also be found in the wilds, stronger and more resilient than their brethren. Some intelligent wildkin also served among the night elf Watchers.[10] Eastern Kingdoms wildkin were also exhibited at Stratholme's zoo.[11]

A group of wildkin was located in Azshara. They went mad when Illidan and his naga ravaged through the area. Maiev encountered them as well and ordered her Watchers to put them out of their misery.[12]

In Dustwallow Marsh, the wildkin led by Bloodbeak the Berserker destroyed an orc village. Samuro, in turn, killed them.[13]

Lately, adventurers traveling through the Hinterlands have reported strange wildkin attacks. The wildkin seem confused, even maddened, and attack relentlessly and randomly.

Even though the wildkin were once numerous in Darkshore, such are their ties to the land that the Cataclysm that devastated Darkshore also decimated their numbers, causing several enraged wildkin spirits to wander Darkshore. Aroom is the last of his tribe and a powerful elder with a strong connection to Elune.[14] 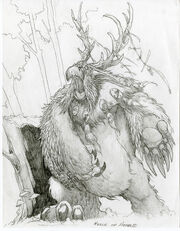 Concept art of an owlkin.

Besides the regular wildkin, there are other breeds that can be found throughout Azeroth. Sometimes the word "wildkin" is used to refer to all of these breeds:

Owlbears are lumbering, misshapen creatures, beloved by the night elf druids and treants alike. They are benevolent by nature, but fearsome when roused or angered. Though they stay away from populated areas, they are often found in the serene glades of Mount Hyjal.[15] Several of them were part of the Primal Guardians group on Moonglade Isle during the Third War.

Owlbears can be found in Darkshore and the Hinterlands.

Owlbeasts are wildkin found in Winterspring, the Hillsbrad Foothills and Val'sharah. Nils Beerot calls them "soulless, feathered monstrosities sent from the darkest depths of the Twisting Nether to prey upon the weak".[16] Some of the owlbeasts in Winterspring are referred to as "moontouched",[17] but what exactly this means is unclear.

They were charged by Elune to protect her places of importance[18] and sacred places.[19]

When cut from the light of Elune, they may turn aggressive.[19]

Owlkin are found on Azuremyst Isle. This specific breed is not normally hostile to other humanoids. However, the draenei ship The Exodar recently crashed nearby, and the radiation from the power crystals of the ship have caused some of the Nestlewood Owlkin to become Mutated Owlkin. The owlkin have also absconded with some of the draenei's spare parts which were scattered about the area.[20] Recently, some draenei have been inoculating as many of the unaffected owlkin as they can, hoping to protect the innocent creatures.[21] Unfortunately, for the Mutated Owlkin it is too late.

A jungle-dwelling moonkin in Hearthstone.

Moonkin (sometimes called owlbears)[citation needed]  are blessed by Elune and spread nature's grace wherever they travel.[22] Native to night elf areas in northern Kalimdor, such as Darkshore, these large, flightless, sapient, and bipedal creatures have the size of an upright walking bear, but with bird-like features such as a beak, feathers, and flightless wings. They also drop eggs of various sorts. The distinct roar of the moonkin is one of the most terrifying sounds in nature.[23]

Most notably, balance druids, druids who wield and balance the power of the sun and moon, can take the form of a moonkin. 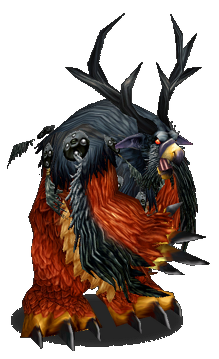 Desiring a creature of might to claim as her own and disenchanted with the violence of wolves, Elune combined the best traits of her beloved night birds, the owls, with the brute force of benevolent bears.[24] The result: a swift, elegant, and fiercely loyal hunter.[25] Other scholars claim that wildkin were the misguided creation of a sorcerer. Regardless of their origins, wildkin have been the beloved allies of night elf druids of the wild and ancients alike since the time of the War of the Ancients.[24]

Wildkin resemble a cross between an owl and a bear, hence the name of the related breed, owlbears. They stand upright at about 10 to 12 feet tall, and their body is covered in hairy feathers, usually brown or white. Their arms have a wing-like shape that end in clawed talons, and their heads have a beak and antlers. These odd creatures also emit a distinctive sound when riled, sounding like a combination of growl and screech. Wildkin feathers are very highly prized in certain circles for their rare magical properties. Wildkin in Hinterlands have mutations, such as deformed limbs, scabbed pelts with large bald patches, or red eyes. No one knows how this wildkin corruption began.[25]

Wildkin possess a high intelligence and often understand good reasoning.[26] Most wildkin do not speak, but they understand Darnassian.[25] Some particular wildkin, namely the ones that acted as Watchers at the time of the Third War, seemed to be capable of speech. They prefer the serenity of nature and stay away from populated areas, frequenting the Barrens or the glades of Mount Hyjal. There are also considerable numbers in Darkshore. Some wildkin can be found in the Hinterlands and Winterspring. They are known to assist night elves and ancients in guarding locations that those races deem important. Wildkin are very territorial, and as such are good guardians. Most wildkin treat peaceful travelers with respect, sometimes coming to their aid or assisting lost visitors out of their forests. Wildkin are slow to anger, but they fight fiercely and relentlessly when roused. They ferociously attack hostile creatures on sight.[25] They have a particular hatred of all undead and minions of the Burning Legion. The great beasts slash with their claws and stab with their beak in combat.[24] A badly injured wildkin may retreat and pursue enemies later, once it heals.[25] Heroes who encounter wildkin either come away speaking of their incredible gentleness or their tremendous ferocity.[24] Wildkin mate for life and bear fuzzy gray cubs that do not develop their claws and brilliant plumage until 2 or 3 years of age. Night elves consider the shimmering pelts and golden eyes of the wildkin to be beautiful.[25] Full-grown wildkin exceed 10 feet in height and weigh between 1,000 and 3,000 pounds, and sometimes even more.[25][24]

Owlbeasts, larger and more powerful cousins of wildkin, seem derived from the same species, but their origins remain shrouded in mystery. The night elves claim that Elune also created the owlbeasts to serve as her guardians, but owlbeasts do not possess the gentle natures of wildkin.[27] Owlbeasts embody chaos over good; they fly into uncontrolled rages in combat. No one knows what sets off an owlbeast’s wrath, so cautious adventurers give the creatures a wide berth. Owlbeasts attack relentlessly and fearlessly. They fly into a frenzy immediately upon entering combat and fight to the death.[27] Owlbeasts grow to almost 20 feet tall and weigh 3,000 pounds or more. They prefer colder climates than do wildkin, and as a result they develop white or silver feathers in the snowy season. Like wildkin, owlbeasts do not speak, but understand Darnassian.[27]

The owlbears are also described in Appendix Three of Manual of Monsters, though these owlbears seem to be slightly different from the previously described. According to this source, owlbears are probably the result of unusual natural selection. They roam all terrain and feed on anything they catch, but they prefer to live near settlements were they can steal livestock to complement their hunting. Owlbears are nomadic, and live in caves or fallen trees until their chicks grow up to be strong enough to keep up with the owlbear's frequent moves. They can be found all over Azeroth, usually in groups of one or two, and sometimes in familiy units. Most farmers in Azeroth call them a blight.[28]

The wildkin are likely inspired by the owlbear, a magical half-avian, half-ursine beast in Dungeons & Dragons that was in turn based upon a plastic toy from Hong Kong. The pet description for Ragepeep references this by saying "Part owl, part bear... and part stag, which handily avoids potential lawsuits."

For images of druids that shapeshift into wildkin see Moonkin Form#Gallery.